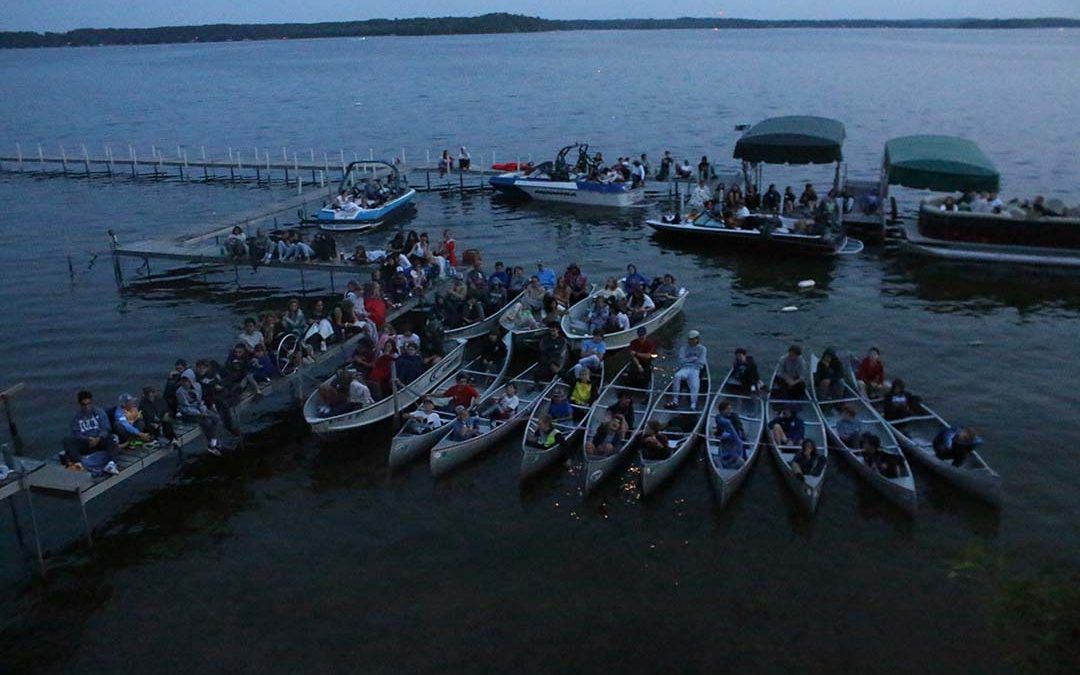 We brought an old classic this summer at Foley. Flick N Float made an appearance in all 3 sessions. Flick N Float is a night in camp, usually the night before a sleep-in day, where the whole camp gathers down at the Marina to watch a movie while seated in lots of different water crafts.

We set up a giant projector screen that hangs off the back of the marina facing Whitefish Lake. Kids pile into lots of different boats, from canoes and safety boats, to the ever-coveted spots on the ski boats in the back. One lucky cabin even gets to sit in the pontoon.

We offered up “canteen” as movie treat for the kids each session and campers got to pick from a variety of candy options to munch on while the film played. Canteen is usually a choice of ice cream or candy that the kids get between 4th and 5th period on a normal activity day.

We had a wide range of movies play throughout the summer, each one a childhood classic of some kind. 1st session we held a showing of “Honey I Shrunk the Kids”, the 1989 movie directed by Joe Johnston, about some sneaky kids who accidentally use their fathers shrink ray to shrink them down to a very small size, comical hijinks ensue!

2nd session was a real treat, where we got to show the younger kid a true Millennial classic, High School Musical! This is the fun musical about high schooler Troy’s journey of learning that singing and basketball don’t have to be polar opposites and can be enjoyed at the same time.

3rd session we mixed it up with an animated movie, Surf’s Up. This 2007 mockumentary film follows Shia Labeouf as a rockhopper penguin who dreams of being a surfer. It has a hilarious cast of characters, including a chicken named “Chicken Joe” who has become so infamous around Camp Foley, he even has his own skiing award named after him.

Flick N Float will always be near and dear to our hearts, and it was such a treat to get to bring it back this summer. Check out even more Flick N Float pictures from 2021 below…