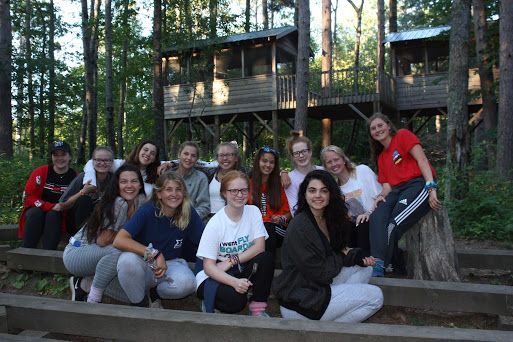 Upper vs. Lower: which Treehouse is best?

A special night for all of our two, three, and four-week campers is going to cook dinner and sleep in the treehouses. Upper Treehouse is up the Moose Trail, about a half-mile walk through the woods. While Lower Treehouse is just a short walk up from the soccer field. Many returning campers and staff have spent nights in both, and know that each one brings a different vibe to the experience of sleeping out away from camp. The debate rages on over which treehouse is better, but here are some camper and counselor thoughts on this important debate!

“Upper has a better vibe even though it’s a longer hike because it’s so pretty once you get there” – Steve Conlin, 1st-2nd sessions Coyote

“Upper has more raspberries and it actually feels like you’re away from camp.” – Sammie Buckhot, 2nd session Wolf

“I like lower more because you can play games on the soccer field and watch the stars more”- Parker Lacey, 1st session Coyote

“The lower treehouse has a big deck which is great for dance parties with your cabin.” – Ana Resines, counselor

“I like lower more because it’s not as far of a walk.” – Nola Brenner, 2nd session Fox

Clearly, there is lots of support for both sides of this debate, and we may not get a definitive answer to which one is best. However, the good news is that no matter what Treehouse you go to, you are guaranteed to have a great time and make lots of memories with your cabin!