Find a porcupine, pick it up. All day you’ll have good luck. 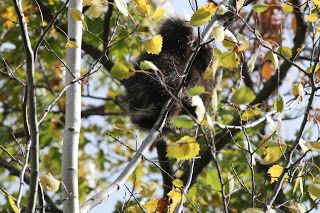 According to the Minnesota DNR, “the porcupine is one of the most interesting and unusual wildlife up to 30,000 sharp quills definitely makes them a bit unusual. Let us have a look to see what else makes these little critters so unique.

Porcupines are a special rodent. One, they are the second-largest rodent in the United States, just behind the beaver. Second, along with having quills for constant protection, a porcupine also has a built-in antibiotic. This adaptation has come from porcupines being mildly clumsy and often falling out of trees while reaching for a snack, thus quilling themselves. If a porcupine quills himself he is not at risk of infection due to this awesome, built-in antibiotic. Not only do the porcupines use quills as a defense, they first let off a strong odor, similar to a human’s body odor, which makes them less appealing to their predators.

Porcupines only have a few predators. Most animals would prefer to avoid a face full of quills, but the most common predator, the fisher, has literally found a way around that. A fisher is part of the weasel family and they are very quick. They are able to get around the porcupines threatening tale, to get to the face and eventually the quill-less belly of the porcupine. Other predators include mountain lions, eagles, wolves, and great-horned owls.

Due to having a solid defense system, porcupines are able to live on their own because they do not need a “pack” to help protect them. They do not hibernate but stay near their dens during the winter months and venture further away during warmer months.  When a female is ready to mate, she climbs to the top of a tree and lets out a loud “scream,” which lets the male know he is able to waddle on over to her tree. The female will give birth to one little porculette whose quills are only soft for a couple of hours after birth!

The pictures above are from a large porcupine we have had hanging out around the Muck Pond.

FACTS:
Porcupines lifespan: around 15-18 but have lived to 30
Porcupines are near-sighted and slow-moving
Porcupines can weight up to 30 pounds
Main diet: stems, roots, berries…but snack on log cabins and outhouses

One of three species (wolverine, skunk) that has white and black on their bodies. Only animals that benefit from letting other animals know where they are at night.