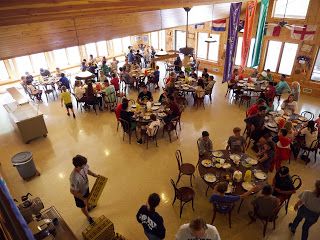 Spy Camp
By: Genevieve S.
Imagine if Camp Foley was a spy camp. Imagine the costumes and disguises. Instead of Crafts, you had “Creative Escapes.” Imagine that every time you get hit by paint in Paintball you lower your score, What if when shooting at Riflery handguns were used. Imagine that you cooked your own meals with things from nature. Imagine that trips were survival lessons and you got dumped in the middle of nowhere and had to survive one, two, or three days. Imagine Fencing had real swords. What if Archery was knife throwing and Journalism was writing reports and solving crimes.
What if water sports were silent swimming and sneaking up on people. Imagine boating was water escape and Skiing was a backup plan. What if while skiing you had to lasso people dummies and wore a disguise. What if Diving was parachuting class. What if Shop was to make weapons and Tennis was deflecting class. If Snorkeling was scuba and sports were to make you a fighter. What if going home was a code name for who knows what?
Spy Camp Short Story
Someone hands me a schedule. Uh-oh. Paintball.
“So, what’s your first activity?” Jeremy asks.
“Paintball!!” I say.
Woosh, a paintball flies by my head. I want to scream but that would be dangerous. Too dangerous.
“Hey, I found him!”
I turn around quickly. Right in time to get hit in the face with a pink paintball. SPLAT!
…
I wake up later in the infirmary. The past flew back at me. I see splot of pink and then black dots popping in. And now I’m waking up in the hospital.
As I walk outside I hear, “Little, pinky piggy coming into the fire. A cute pinky piggy.”
I turned pink, well more so than I was already.