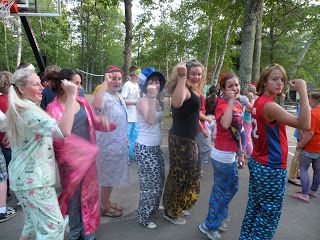 One of the favorite nights of the camp is the Grand Dance Festival. Campers dress up crazy and make their way to the Wabi for a memorable night of dancing like a fool with friends. As you grow up and out of camp, you’ll definitely remember a lot of the dance themes, popular music, and spending time with friends in the Wabi (or Basketball Court if you were around for those dances).

This summer will be my tenth at camp. For most of my summers, especially as I got older, one of my favorite nights was the dance. Gettin’ my boogie on to some classic Backstreet Boys hits and rocking out to Bohemian Rhapsody–what could be better? When I look back at my dances as a camper, two moments jump out at me.

One of my very first memories of camp is from my first summer in 2003. I was a wee young ten-year-old in Yakama, and first session had been progressing quite nicely. I had made new friends, and I learned how to play Mafia; everything was great. Then, disaster struck. The dance theme was announced: Cabin Colors. Each cabin picked a color and everyone was supposed to deck themselves out from head to toe in said color. My cabin-mates decided that pink was the best choice, and I started freaking out because I didn’t own any pink. Worst case scenarios started flashing through my head: Would my cabin-mates stop liking me because I didn’t match? Would they bar me from the dance if I wasn’t dressed for the theme? Ten year old me couldn’t handle it. I was so distressed about not having any pink that I started crying.

Everything turned around when, probably about twenty seconds later, some of the girls in my cabin asked if I needed to borrow anything.I don’t think I’ve ever been more excited to don a bright pink rain poncho than I was on that night.  All of my earlier fears were completely unfounded. I really hope that I gave my friends a caring bead at our cabin counsel later, because their offer to share brightened that entire session for me.

Fast forward to my last year as a camper, 2009 first session. Something about being a CIT, being back out on the basketball court, and being there with a ton of my friends made that night incredibly special. When all the wolves got together at the end of the night to circle up and sing along to Piano Man (because that had magically become a thing the year before), I felt like we were a family. That dance was the cherry on top of a great session, and one of my favorite camp memories.

As a counselor, the dance is still one of my favorite nights of camp. The Wabi and its new tech is cool as can be; the flashing lights just make me want to break out into a round of Call Me Maybe or Aaron’s Party. All of last summer’s dances were fantastic, and had some particularly brilliant themes (I’m looking at you, Bro-down Throw-down). Even if it’s a little warm, when the music is blasting, I feel the need to dance with anyone and everyone. I will dance at you until you dance with me. Though my dance skills are a bit lacking, I like to think I make up for that with enthusiasm. I’ve got at least four spectacular nights ahead of me this summer– who’s going to dance with me?

Are you ready to put on your dancing shoes this summer? We hope so because each session you can count on attending an awesome and memorable Grand Dance Festival!