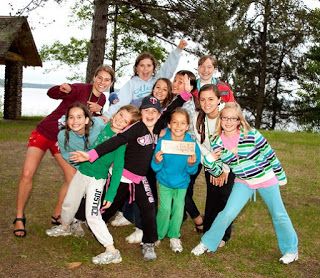 I will be a third-year counselor this year and I don’t even remember the number of summers I have spent at Foley. That being said, my first two summers as a counselor couldn’t have been more different. The first year was cold and rainy, even I, a seasoned 1st session camper and native Minnesotan though it was too cold to jump in the lake. The number of days we changed lesson plans, canceled classes, started late because of the rain were too numerous to count. My second summer was hot and I wished I could jump in the lake for the swim test at the beginning of the sessions, but was helping the nurse check everybody in. Last summer the accessory to have was a water bottle filled to the top at breakfast and empty by morning fun.  The differences in the summers taught me one very important thing, No matter how much you plan or think “I’ve got everything under control” don’t count on mother nature cooperating.

The treehouses at lower mosquito were put in during some of my last summers as a camper. With two trips as a camper and eight trips with my own campers to the treehouses, I have learned that every lesson. I think it rained every trip up there except one which is a pretty impressive statistic. Even though it rained, I think those were my favorite trips; there is nothing like the sound of rain hitting the leaves of the tree when you wake up or as you fall asleep at night. The rain also does one very important thing that anyone who has gone to the treehouses will know….it keeps the mosquitoes down!  Despite the numerous trips I have made back to camp after in the rain after a night at the treehouses I wouldn’t have traded anything for them. I got to know my campers better by sharing games and stories in the treehouse cabin than I ever could trying to catch them between classes or before they go to bed.

The crazy weather brings about some crazy things including hours practicing for the camp-wide lip-syncs and then being told that classes were getting back on schedule and the lip syncs would have to wait. Watching the cabins perform, starting with the youngest and finishing up with the oldest campers, is exciting and hilarious. You never know what song anybody is doing, that is kept as a national secret. The dance moves that everybody comes up with are hilarious, we can make moves to almost anything.

I can’t wait for this summer and all the crazy weather that is bound to happen. I mean we still had snow at the end of April and several lakes still have ice on them in May. So let’s get this summer started and see what the crazy Minnesota weather will bring us. Whatever it is it will create some awesome memories that I’m sure all my friends will be sick of hearing before I can make some new ones.