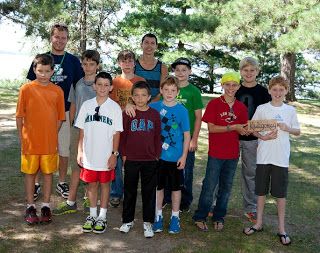 For me, the summer of 2012 at Camp Foley seemed like it was filled with a lot of empty birthday wishes. In a matter of two months, I went from being a thriving, young 19-year-old counselor to an old geezer somewhere between the ages of 50 and 80.
Allow me to elaborate. On a fine Foley morning, my good friend and assistant director, Aaron Nelson, decided he would play a practical joke by telling my campers to sing me happy birthday as a wake-up call. Not only did they sing happy birthday, but they also made sure to remind me that it was, indeed, my birthday. I’ll let you in on a little secret: my birthday is in December.
Maybe Aaron was trying to be thoughtful, “Matt Carney never had a birthday at Foley, maybe I’ll give him 50 of them!!” And so the wishes continued. Day after day, campers would say “Happy Birthday!” and I would say “thanks” or “it’s not my birthday!” Nobody got the memo. The wishes became so real that Aaron actually convinced me Candy was baking a cake for my cabin. Unfortunately, the cake never came.
As the sessions passed, my continuous birthday stayed continuous. But as the wishes stayed the same, Whitefish Lake decided to give me a new present. As many others can probably recall, the temperature of the lake killed off a certain species of fish, which collected thousands upon the shore. The Marina and Swim dock became a disastrous place for water activities. At one point, there were so many fish that the JY’s racing class had a competition to see who could collect the most fish in their boat.
While many of the counselors and campers saw this as an opportunity to be on the land, Mr. Nelson saw this as a gold mine for his cruel joke. At the peak of the fish infestation, Aaron had the majority of the campers join in singing happy birthday to me while gathered on the benches. After lunch had ended, I could hear the chant “Ashes to Ashes, Dust to Dust” erupt behind me. That day would officially be my unofficial birthday.
A few of the Wolf boys grabbed me and wouldn’t let me go. As the chant continued, I was dragged to the swim dock to face my wet and fishy doom. I walked down the stairs and turned around to see several counselors with giant grins, ready to toss me on the count of three. I lied down at the edge of the dock and let the counselors grab my limbs. The only thing I could do now was to embrace my destiny. And so it began: “ONE… TWO… THREE!!!!” I was airborne. As time seemed to stop, something inside me was changing. I hit the water and euphoria came over me. Even though I never had a birthday at Foley, all of my dreams had come true. A “Foley Never” had become a “Foley First.”
As I opened my eyes to observe my fishy comrades, I realized that all of the empty birthday wishes were not empty at all. They were signs of love and affection. I had people around me that cared for me and supported me, but it wasn’t only me. Everyone at camp has it because it’s what camp is all about. At Camp Foley, it’s everyone’s birthday every single day. Even if you might not be turning a year older, every camper and staff are treated with excitement and joy similar to the way they would be treated on their birthday. To me, that’s what makes camp great.
To conclude this elongated tale, I raised my head out of the water and did what any wet, grimy counselor would do: run after campers. So I jumped out of the water and sent the kids screaming. On this fine day, nothing could stop me from having fun.