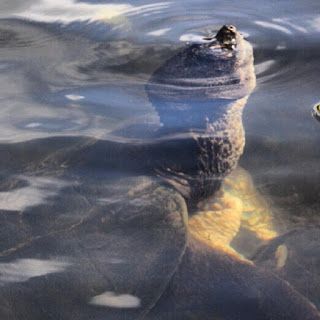 Today’s Camp Creature story is about a young Minnesota Snapping Turtle, who lived in the Camp office in 2012 and 2013.  It was found in the summer of 2012 down by the marina docks by Peter Beltz, a camp counselor.  We asked for help naming this fella, and the winning name was Bowser. Bowser lived up to his name and got more “snappy” as he grew. Now he has been in the wild for the past 3 summers. Bowser is likely “dinner plate” sized and just loving the pond life. Let’s refresh our knowledge on Snapping Turtles!

What’s this creature all about?  The Snapping Turtle, or “Snapper,” is Minnesota’s largest turtle.  Most are brown, black, or olive-grey in color, have sharp-clawed feet, and feature small spike-like ridges on the top of their shells.  Snapping turtles can live 30 years in the wild and typically grow to about nine to fourteen inches in size across the top of their shells.  In captivity, they can live 47 years and weigh up to 86 pounds!  The largest snapping turtle ever found in the state measured nineteen and a half inches and was nicknamed “Minnesota Fats.”

Snapping turtles have long, snake-like necks and powerful beak-like jaws that are used to snare food and protect themselves.  These jaws are important because unlike most turtle species, an adult snapping turtle can’t fully withdraw its head to protect itself from predators – its lower shell is too small.  Adult snapping turtles can be aggressive when confronted on land; they will often hiss and “snap” their jaws at animals they consider to be a threat, which is how they got their name.  They have been known to bite humans on land when threatened, and their bites can be painful.  However, snapping turtles are rarely aggressive when underwater, which is where they prefer to spend most of their time.  Most will simply swim away rather than risk any kind of contact.

As stated above, our Camp Foley pal began to dislike being handled, thus prompting our Nature instructor to release Bowser into the wild. Now being between four and five years old, he is almost a “mature” adult. So long as he made it through his first couple of winters, his list of predators is at a low and he is able to thrive. We are confident Bowser is still at large and on the right path to someday become Hidden Lake’s largest snapper!

As an omnivore, snapping turtles eat both plants and animals.  They hunt frogs, small fish, and snakes and will eat dead creatures too.  In fact, snappers have even been spotted eating small birds and mammals.  These turtles require water-pressure in order to be able to swallow, so they always feed underwater.

Adults rarely leave the water except to lay eggs or bask in the sun on a rock or log during the Spring.  Because the snapping turtle’s nostrils are on the very tip of its nose, it can simply poke the very edge of its nose up above the surface of the water to breathe, keeping most of its head and body hid beneath the water from potential predators.
Like all reptiles, the snapping turtle is cold-blooded.  To survive our Minnesota winters, it typically buries itself in the mud at the bottom of a pond, river, or lake from October through March.

Come spring, remember to drive slow, and help a turtle in need!

(for more info on the Minnesota Snapping Turtle, check out these links)