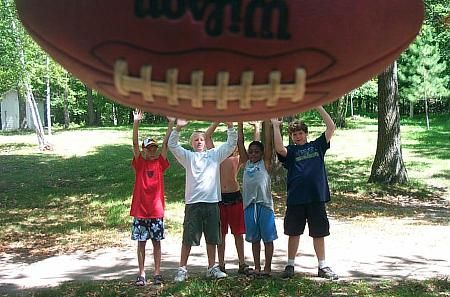 For this edition of Throwback Thursday, we thought it would be interesting to take a trip back to 2003 to see what Camp Foley was like. Amazing enough, it was very similar to what it’s like today. Campers were just as eager to battle their nerves and try an activity for the first time and counselors were just as silly with coming up with evening activities. Overall, it seems that ten years ago, the camp was pretty much the same as it is today!

Here are some fun memories that were published in Camp’s newsletter – the Bugle – in 2003.

Sailing: When talking about dedication there is only one thing that comes across my mind, which is of course sailing. During the Third Session, Jack McGarvey and Henry Dickinson decided that they would try out sailing. They did not know what to expect until they got to the Sailing Optis, first time class. In this class, they displayed hard work but at the same time having the best time of their lives. You always knew when Henry and Jack meant business – Henry’s hat would go on backward and Jack would have that happy grin on his face. After their first day of sailing, the only thing these two individuals would talk about is sailing and I loved to hear about their many different sailing adventures. They were always curious about everything that had to do with sailing. They kept talking about their dream to be able to go out and sail camp’s 420s but in the meantime, they are mastering the Optis. By Mike Schmid, 2nd Year Counselor

Forts and Socks: My favorite moment from Camp Foley 2003 happened during the Fourth Session. “Forts and Socks” was Cabin Kildare’s evening activity. All the campers had questions about what we would be doing. I explained that we would build forts in our cabin, and then proceed to have a huge war of throwing socks at each other. They all laughed and then asked what we were REALLY doing for an evening activity. When we finally got started, they all go pumped up about throwing socks at other people. When we explained that it would be campers versus counselors, the campers got pumped up even more. The campers took a long time to prepare their fort and took a lot of pride in their accomplishment. It was an intense half-hour of battle, and the cabin was a huge mess afterward. During cleanup, not a single person was arguing about who had won the battle, they were all just satisfied with having a fun time. It was a blast! By Mike Mogard, 1st Year Counselor

Some other interesting 2003 facts:
-Recent counselor Kylie Beltz received her SilverBirchbark Award!
-Recent counselors Leslie Strobel and Chris Blahna received the Anchor Award!
–Banquet themes: Comic Super Heroes and Wild West.
-It was uncommon for campers to have their own digital cameras, so campers were encouraged to bring disposable cameras!
-Alli was signed up for her fifth summer on staff as a Marina Director and an AD!

Is camp pretty much the same since when you started? Are you an alumnus that remembers something funny happening in the past summer? Please share with us in the comments below or at Fun@CampFoley.com!