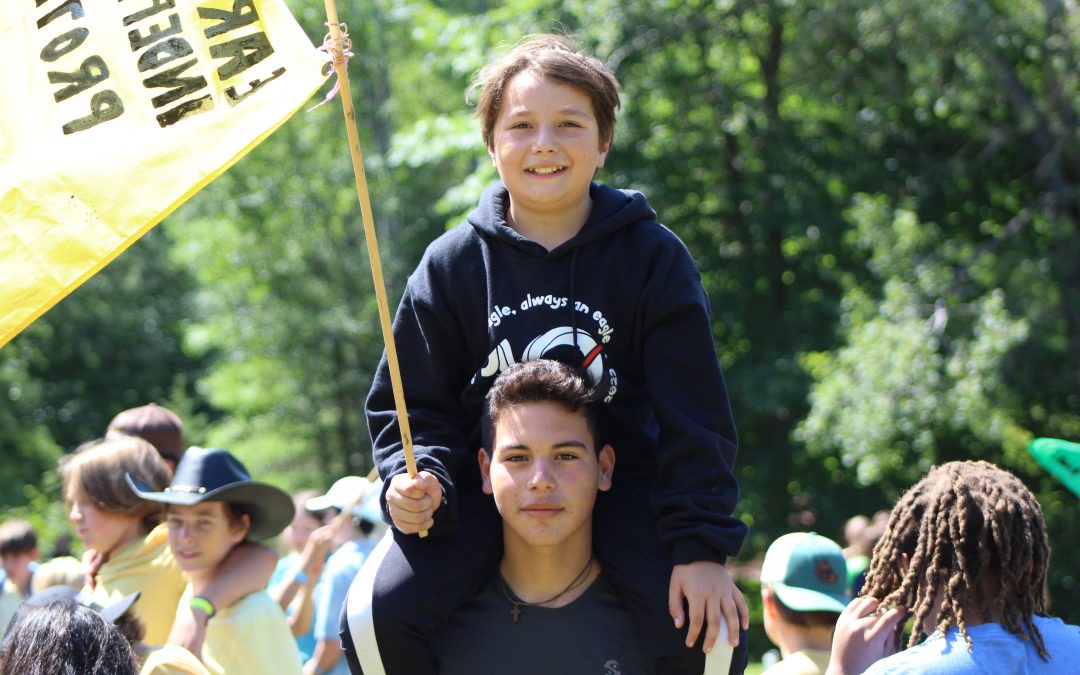 The Battle of the Factions!

The 2022 Alpha Games was an all-session affair this summer! Alpha Daily challenges became a part of camp life. Everyday a new challenge was introduced for one

activity each day. Every camper who completed the Daily challenge earned 100 points for their team. The challenges ranged form win a game of paintball with a bunker tag, kiss a fish, win a sail race, or present a craft project to an AD. These Daily challenges pushed one team to ultimate victory 2nd session!

We had 3 different Alpha Games events each session…

First up was Spirit day! Campers had to compete in a gauntlet of different challenges on the soccer field. Each challenge tested a different skill, agility, strength, creativity, wits, and teamwork. Each challenge had to be completed in a specific order, solving the riddle at station 3 helped you get the piece of paper you needed to win at station 4, and so on. The last teamwork challenge saw all teams creating different shapes as team. It was hilarious to watch teams of 20-30 campers create shapes like a boot, the state of Minnesota, and the Camp Foley logo. The day ended in a colorful powder fight, where each team tried to cover their opponents in their team colors. Lots of messy fun!

The next Alpha Games event happened following the 3rd sign up. We called it Alpha Strategy Night. The big alpha challenge was revealed (A giant relay race!) and teams broke up into factions, 6 groups of 6 within the teams. They planned out the order the teams wanted to complete stations in the relay, and came up with call and repeat chants to keep each other motivated on the big day. The night ended with a fabulous Alpha Fashion show, where campers and staff got to show off their team spirit and awesome Alpha accessories they had brought from home or creatively put together at camp.

It always takes place on the last full day of camp. We tested campers’ strength, wit, agility, creativity, and teamwork once again in a variety of stations set up around camp. The teams that earned the most points at each station got the opportunity to pick tools that would help them in the grand finale relay. The final challenge was a simple task of moving water from a full bucket to an empty one, using the whole team as an assembly line. Tools earned from the different stations could make or break a team’s victory. 4 versions of each tool were available and the team who had earned the most points at a given station assigned all 4 tools out to the teams. There were cups in a variety of sizes, teaspoons and ladles, Ziplocs with or without holes, and even some ways to sabotage other teams, like a blindfold! All our alpha teams showed incredible grit and teamwork throughout the sessions, but 3 managed to pull ahead at the end of each session.