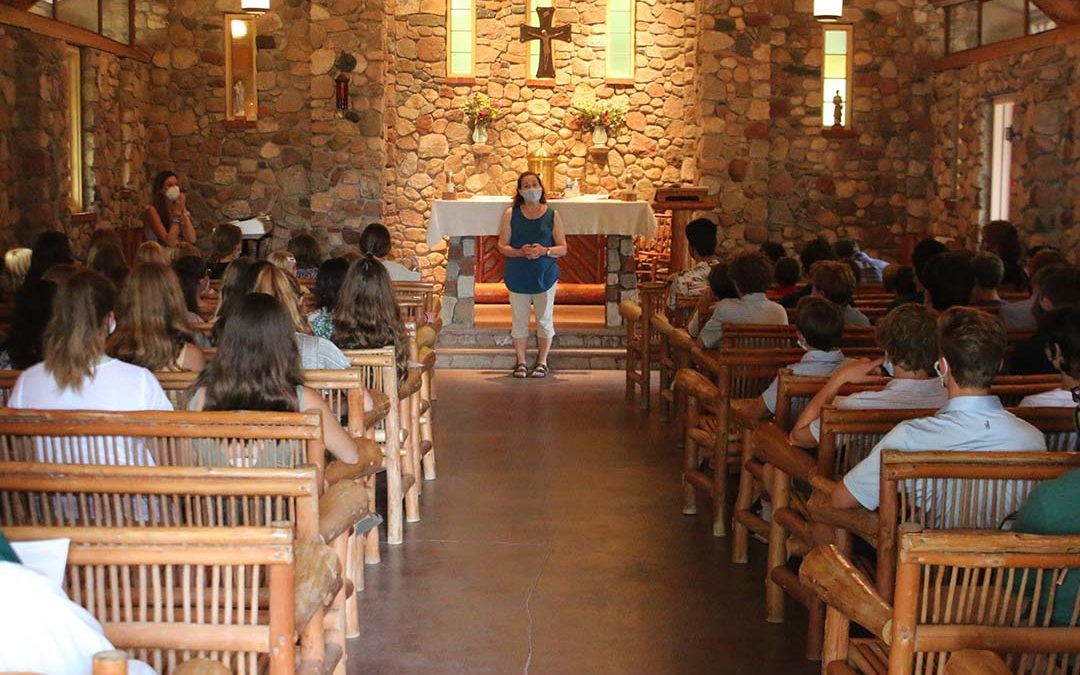 We are always encouraging campers to GROW while here at Camp Foley.

We try to create many different opportunities throughout the 3 week session for campers to do this. Campers and counselors slow down to sing grace before our meals and listen to readings discussing our 6 character traits, Respect, Responsibility, Trust, Caring, Fairness and Citizenship. Campers read motivational quotes and stories of heroes in the cabin and share their thoughts and ideas with cabinmates. And perhaps most well known here at Foley… weekly, our camp community attends either Catholic Mass in our camp chapel or a non-denominational service referred to as “Non-Denom”.

Our chapel has a long history…

In the early years, the founder of our camp, Father Foley, made a promise to the Blessed Virgin that if camp was successful he would build and dedicate a chapel to her here on Foley grounds. Good news for all of us… Camp was successful! So Our Lady of the Snows was built by local builder Henry Ruud. Construction began in 1934 without blueprints and using field rock from the local area. The benches, still used today, are made of cypress wood from Florida and were soaked

Our Lady of the Snows celebrated its first Mass on August 5 (the feast day for Our Lady of the Snows) in 1937. We have been very lucky to have an amazing priest Father Mike Arms who comes to serve mass every chance he can in the summer time. Father Mike has a special connection to Foley, he actually served mass for Father Foley when Father Mike was a young boy, and he went onto be a Foley counselor, living in Yakama!

Mass at Camp Foley is usually a traditional service, with prayer, songs, readings, and the handing out of communion for campers and staff who partake. All campers who would like a more structured ceremony, regardless of their denomination, are welcome to attend mass. It has become a fun tradition for campers to dress up a bit for mass. Girls often pack a special dress or skirt, and boys can be seen sporting polos and button up shirts.

Non Denom has a bit of a different structure…

Campers who wish for a less religious focus on spirituality can attend non-denom at camp. It occurs at the same time as mass and is a great chance for quiet reflection for the campers. Each non-denom has a theme such as humility, gratitude, grit, or integrity. We open each one with a mindfulness exercise. This meditation introduces the theme first and helps introduce what the kids should focus on for the hour.

After a mindfulness moment, we transition into readings. These readings have an underlying message that will also link back to the theme. Different campers volunteer to do these readings, just like at mass. The goal of these readings is to put the overall theme into real world context for the kids. Integrity can be a big idea, but hearing a story about someone doing the right thing against tough odds helps campers realize that they too can show integrity in everyday life. After non-denom readings, the campers are given the opportunity to tell their own stories on “sharing stumps”. This is time where we practice active listening, campers will come up to sit on the stumps and share a story about a time in their life when they demonstrated the theme of the week (like integrity).

We do snaps after each story is shared, and anyone who would like an opportunity to share gets one. We wrap up non-denom with soft music and reflection. We ask the campers to reflect on how they have lived the theme in the past, and ask them to set a goal to live by this theme in the coming week of camp or when they go home.

It is important that all campers at Camp Foley have the opportunity to grow spiritually at camp. It is a special part of our Foley community, starting as a Catholic Boys camp to now, spirituality and reflection have long been part of our history. Can’t wait to get back into it this summer!