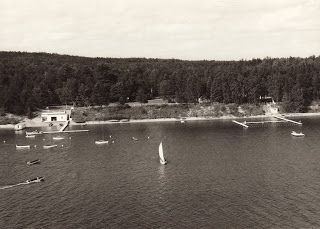 We are proud to bring you a Throwback Thursday request – 1961 and 1962. As usual, we got our information from the old newsletters. I must say, as I go further back in time the newsletters get very silly. Back in the day, there was a lot of mocking of returning staff and poking fun at the campers from the past summer. I found a lot of inside jokes and letters in jest (if you’re ever bored, I strongly suggest reading some of the old Bugles! Read below for some of the 1961 and 1962 highlights!


In 1955 when Cabins Kadikomeg-Shignwako for the oldest campers were opened they were outfitted with new 6 footbeds, the standard length, which was considered quite ample six years ago. This year Kadikomeg-Shingwako will be equipped with 6 ½ footbeds. A sign of the times? It sure is! The average camper is getting taller thanks to the research in nutrition and the field of vitamins. Mingo-Wahtassa will benefit from the Sioux cabins’ beds. Before our oldest boys lived in Mingo/Wahtassa, it seems that they lived in Kad/Shing way down on the end of the boys’ side. It also appeared that boys went through a collective growth spurt in the late 50s early 60s.

A new waterski boat will be in order for ’62 as fiberglass fatigue has afflicted our old boat after six years of hard use. No boat gets more use, running five to six hours a day consuming about 600 gallons of gas a summer. Surprisingly, we think that our three boats use about the same amount of gas that one boat used in 1961! Snaps for technology forever improving gas mileage in ski boats!


Prepare yourself for the hilarity of the following joke found in a 1961 newsletter: Letter Home – Dear Mom: Please send food. Lots of food. All they give us here is breakfast, lunch, and dinner. Your loving son.

Quite possibly the most entertaining tidbits from the 1962 newsletters is the first mention of a Swimdock/Marina rivalry at Foley. It’s no secret that every summer the Swimdock and Marina staff have a healthy rivalry in good fun, let’s hear how it all began…

Rivals Clash on the Waterfront
The staff of Camp Foley has suffered occasionally from dissension in the ranks. This year proved no exception to that state of affairs, John Dinges’ ‘Happy Boat Dock’ and Jack McCoy’s ‘Friendly Swim Dock’ had some times of rivalry…

(As explained by the Swimdock🙂 I can’t say what motivated those men to break the treaty. In a flash their heads swelled with a superiority complex and they attempted to show how much better they were (ha-ha)… They even invented some story about their owning the Waterfront and how they have generously leased the swim dock area to us. Everyone knows that when Father Foley first came to the north woods he went swimming as soon as he could get his suit on. Then he marked off the swim dock area and after that the boat dock area. Since we are a friendly group, we aren’t going to say any more about the rivalry. We know you know who your real friends are and we hope the men of the boat dock realize it soon.

(As explained by the Marina:) It is common knowledge that the stalwart men of the boat dock are not only your friends but are also the happiest and most efficient unit of your Camp Foley staff… The Happy Boat Dock rang with the continual peals of laughter of the campers whereas the Swim Dock gave forth mainly with the groans of campers undergoing the tortures inflicted by their instructors – that is when the swim dock was still standing… Your campers can attest to the wonderful treatment accorded to you at the boat dock…  Compare the range of activities between the boat dock and the swim dock? … It doesn’t seem necessary to say anymore.