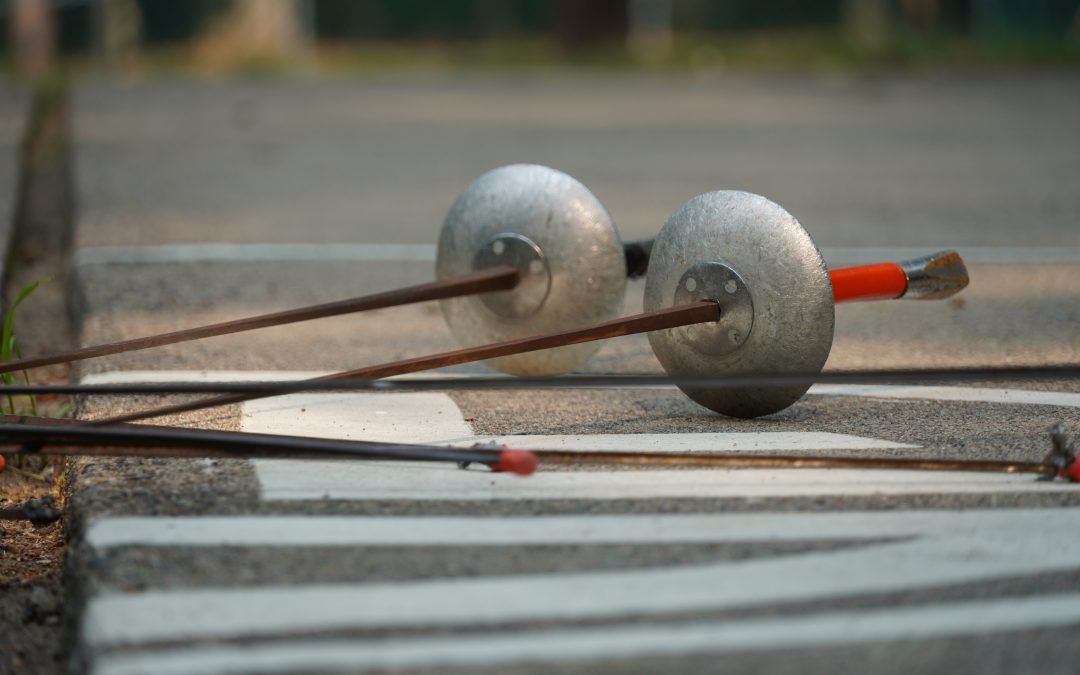 Today we are shining the spotlight on modern Fencing here at Camp!

Fencing was first brought to Camp Foley by Rivers Patout, with the only equipment being 2 sabres and 2 masks, not even a jacket! In 1961, with the donation of used fencing equipment from the Notre Dame fencing coach, Walter Langford, the fencing program really took off.

LARP Fencing, or live action role play fencing, was introduced by Ally Daily in 2013, which mixed fantasy storytelling with the sport of fencing. This activity had the campers roaming around the grounds of Camp Foley slaying dragons, rescuing villagers, and journeying to far off places only real

in our imaginations. It included campers creating alternate identities and choosing a special magical power that could be used during their battles. Campers stayed in character and made decisions and acted scenes along with duel and group fencing matches

Like in the Olympics, Camp Foley offers three types of Fencing, epee, sabre, and foil. Each weapon had distinct rules and target area. An epee is the biggest sword and has the largest target area. You can hit your opponent with the tip of the blade anywhere on the body and it counts as a point.

A sabre is the second largest weapon, and looks the most like a rapier or pirates sword. It’s special because you can use not only the point of the sword to score, but also the blade! The target area for a sabre is from the waist up.

Foil is the third weapon we have here at Foley, and it is definitely the most prominent. The foil weapon is the smallest of the three, and has the smallest target area. In what I like to call the life jacket area, a point can only be scored in foil fencing in the chest and back of the fencer. So if you’re keeping up, that means arms, legs, and your head DO NOT count and are in fact off target. All three ribbon awards a camper can earn at camp are in Foil fencing, the novice, basic, and advanced. The basic and advanced award are on the path to a camper achieving their silver and gold paddle awards as well.

As our campers from this last summer know, WE GOT NEW SWORDS, This summer two new weapons joined the collection. A Sabre and an Epee! This particularly exciting because it brings the total number of epees and sabre up to an even number allowing more duels to happen in one class period! The campers got to have lots more sabre and epee tournaments this past summer.

Fencing is wonderful part of Camp Foley, and was my favorite activity to teach. I’m so lucky I discovered this sport as a camper and now can call myself a fencer in my own right. And I’m so proud of all the fencers I’ve trained over the years, and the many more fencers yet to come. On Guard, Fencers Ready? FENCE!