A History of Riflery 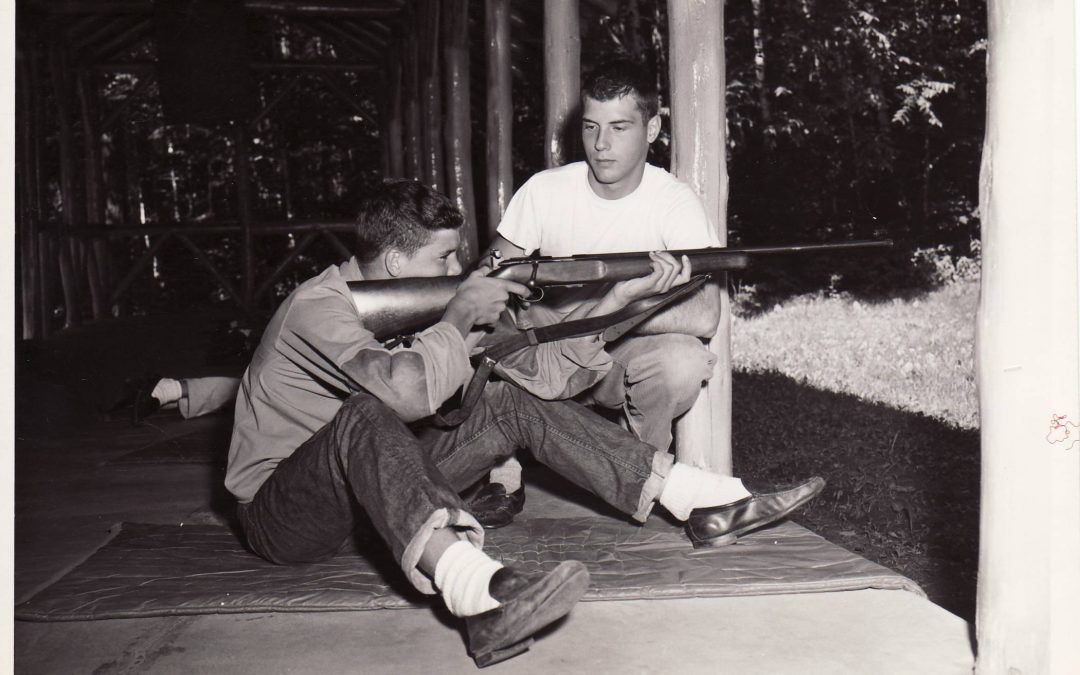 We are continuing to take some time this summer to take a look back at the history of Camp Foley. With 95 years of Camp under our belt, Camp has inevitably changed with the times. We are very proud of how far it has come and all the history we have accumulated. We have recently created an archive of historical pictures and records dating back to the 30s!

Today we are taking a look at the Riflery Program and its history at Camp Foley! This program is very special to Camp Foley and a fun fact to remember is that Riflery is not a “real” word and was created to describe the Rifle Program here at Camp, now anyone from the Foley Community can tell you exactly what Riflery is!

1930s
Riflery starts here at Camp in 1938. The range was not across the road like we are all used to, but was actually far on the boys end behind Kadigomeg and Shingwako. The Riflery awards were also originally linked to the NRA, and we used their award system at camp for many years. We don’t have pictures of the Riflery program from the 30s but don’t worry, the 40s more than makeup for it!

1940s
Speaking of the 40s here we are! The program doesn’t change much from the 30s to the 40s but we have the added bonus of some amazing historical pictures to go along with this decade.

1950s
Big changes come to Riflery in the 50s. The range had officially moved to across the road, where it still is today. In 1957, a new Winchester 69 Rifle is purchased for camp. In 1957 and 58, Camp Foley also participates in “Shoulder to Shoulder” matches with 5 other camps in the area.

1960s
Lots of change comes with the 60s for Riflery at Camp Foley. Many purchases of new equipment is made. This is also when the introduction of the Moskeeto Program is made in 1966. Moskeeto shooting was a fun shooting game which involved shooting at little black clay pigeons, blackbirds, with a .22 smoothbore rifle and .22 shotshells. The targets were reduced to about half the size of standard clay targets used for regulation trap and skeet shooting. A Range specifically for this program was added in 1967. Also in 1967 was the purchase of brand new shooting jackets, and a storage room was added to the Rifle Range in 1968.

1970s
Here we are in the 70s! This is always a fun check-in with Foley History because girls were allowed to attend Camp Foley for the first time in 1974. We then see the very first Boy-Girl Rifle meet, a shooting competition between the two sides of the camp. The boys win this first by only 3 points! New Rifles are purchased in 1977. In 1978, the 22 caliber moskeet pump guns are replaced by 410 gauge shotguns and our true Trap program begins.

1980s
Not a lot changes from the 70s to the 80s at Riflery. We see evidence of the campers learning about a variety of different kinds of guns, from the rifles and shotguns, and now including a small pistol that some kids could try. We also know there was a Rifle “Junior” competition between Camp Foley and 3 different camps, including Camp Lincoln and Thunderbird. Foley takes the victory with a total score of 349.

1990s
The 90s are a big turning point for Riflery. In 1994, Camp decides to break away from the NRA award standards and develop its own award system. Also in 1994, 4 20 gauge shotguns are traded for 410s. Late in the 90s, in 1998, playing card shooting becomes a fun part of Riflery, and camp purchases Steel Reactive targets for the range. These are targets that spin!

2000s
We reached the 2000s! This is where Riflery really begins to look just as we remember it. Some new changes are made to the range, with new benches being built in 2001 the dirt backstop being built ip higher in 2004 and again in 2007, with that classic “U” Shape finally being completed around the range. New safety equipment for campers’ eyes and ears are added in 2005. In 2006, new automatic trap throwers are added to the range in honor of George Hale’s 25th year at Foley. One year later, new Anschutz rifles purchased to replace Marlins. five models 1903’s, and eight models 64 MPR guns. Lastly, in 2008, Camp Foley started providing gun rests for beginner shooters and smaller campers, these can be used for practice and to help campers get their Target Shooter #1, the first award in Riflery.

2010s
We have arrived in the present decade! Things at Riflery settle into what the current campers will immediately recognize. In 2011, Camp purchases 4 Mossberg Super Bantam Shotguns and the trap program becomes a favorite activity among campers. The trap is rounded out and completed in 2015 when Camp gets 2 brand new Champion Trap Throwers, that launch the clay pigeons HIGH in the SKY! In 2019, we had the second girl ever, Joey D., earn the Expert Rifleman award, the highest award possible at Riflery. Riflery has been around since the beginning of Camp Foley’s history and we are so excited to see what comes next for the activity!