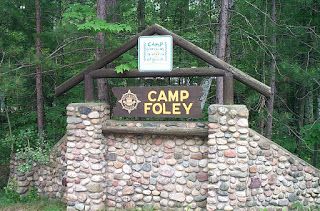 Want to talk about Disney? Good, me too!

Camp Rock is a 2008 American musical television film directed by Matthew Diamond and starring Demi Lovato, Joe Jonas, Meaghan Martin, Maria Canals-Barrera, Daniel Fathers, and Alyson Stoner. It is about Mitchie (Demi Lovato), a young girl aspiring to be a singer, and her time at Camp Rock, a summer music camp, where she will discover friends, adversaries, romance, and her voice. Pretty standard Disney stuff, but after watching this movie, kids might be left with some pretty unrealistic ideas about what summer camp actually is. I am here today to set the record straight!

You can watch this movie right now with a Disney+ subscription.

What is the same?

Because the movie takes place at a camp, there will of course be some similarities to Camp Foley…

1.Camp Rock is set on a beautiful, picturesque lake. Camp Foley is set on Whitefish lake and the waterfront is a place where many of campers love to go, although there is more sailing and skiing done, than singing.

2. Mitchie’s parents discuss at the beginning of the film that they can’t afford to send her because it’s too expensive. This can be a reality for a lot of families who want to send their children to camp. Camp Foley offers many different options for financial assistance, from scholarships, to helping with dish washing. Our octo and our dishwasher program looks a lot like what our main character Mitchie takes

part in at Camp Rock.

3. At Camp Rock, the character Tess is the diva of the camp. Prepare yourself to be shocked, but all camps have diva’s (both campers and counselors). But this isn’t always a bad thing, and camp divas can come into their own and embrace the amazing experience they are apart of. Camp brings out the best in people. Just like what happens at the end of the movie.

4. The campers (and counselors) break out into random synchronised songs without any advance warning – especially during meal times. While Camp Foley may not have the production value of Camp Rock, we do end up singing an awful lot. Any of our opening and closing campfire skits would look right at home in a Disney Musical. We even sing before every meal in the dining hall, perhaps with less choreographed dancing.

What are the differences?

There are many differences between a movie about camp and camp itself. Camp Foley, in my opinion, is just as magical as Disney, but we don’t the Jonas Brothers… not yet anyway.

1. The campers at Camp Rock are all practically borderline adults. At Camp Foley, campers ages can range from around 7 to 17 years old.

2. Our diva Tess rocks up to Camp Rock in a limo, without parents. Campers usually get dropped off by their parents or take the bus up from the Twin

Cities. We do have some parents picking up campers by boat, and even sea plane, but I’ve yet to see any campers arrive by limo!

3. I never saw anyone on Camp Rock lugging HUGE duffels out of the cars on Camp Rock, or counselors sweating while helping to trek them to the boys and girls end in the midday sun. Real camp is a little less glamorous, and a lot more hard work on opening day!

4. The campers at Camp Rock seem to spend a lot of time unattended, whether in their rooms rehearsing or while eating their lunch in the dining hall. At camp, it’s rare the campers are ever alone without a Counselor in sight. Counselors are always available around Camp Foley, and supervise all activities. Campers may find themselves without a counselor right next to them during free time, when they can lounge on Foley green or hang out in the hammocks. But our staff are never far away.

5. Although campers often break into spontaneous, synchronised song, it’s rare that a complicated dance ever accompanies it unlike at Camp Rock. Sure we have movements that go along with songs, like Wisconsin Milk, The Damper song, The Banana song and more, but nothing quite as polished as the kids have going on in this movie. Also, I’ve never seen anyone dancing on the dining hall tables at Camp Foley! Lets keep it that way!

7. At Foley, generally you will find that the campers spend their free time making friendship bracelets and playing Tetherball, rather than rehearsing laboriously for an upcoming talent show Although this has been known to happen

during our Founder’s Day celebration, but that’s only one night of the session, not the whole point of camp.

8. The cabins on Camp Rock look pretty cosy with a few single beds dotted around, rugs on the carpet and curtains on the windows. If you have been to Camp Foley you know our cabins definitely don’t look like this. We have beautiful cabins here, but having carpet and curtains would make them a lot harder to keep clean and a lot harder to keep fresh air flowing in and out.

9. Camp Foley is technology-free zone. The kids at Camp Rock have cell phones and laptops, which for me defeats the whole point of going to camp and getting away from the real world!

10. The campers at Camp Rock all look very clean and presentable with brushed hair and ironed clothes. Half the fun of camp is that you don’t have to worry about mud on your clothes, or wearing the same outfit twice in two days.

At the end of the day Camp Rock is a fun movie. It has some heart warming moments about kids finding their passions and true selves. This is exactly what we hope will happen for all our campers when they come to Camp Foley. But I think we can all agree, the real deal is always better than a movie.