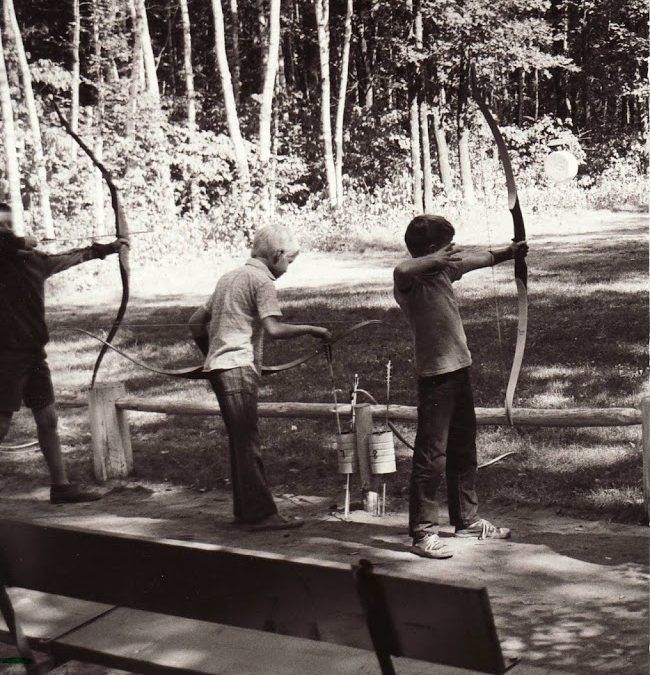 Here we are with another installment of our History Blogs! This one will focus on the history surrounding Archery as an activity here at Camp Foley! Archery has been around since the beginning of Foley History and is very popular still today! Check out how Archery has changed over the years…

This is the decade where we first see pictures of campers shooting archery at Camp Foley. The range as we know it looks a bit different in these old pictures. The boys are using wooden bows and tin cans to keep their arrows upright while shooting.

Not a lot happens in the 50s to change Archery, but it definitely happened. In 1953, the Archery area cleared and the building added for storage.

Here we are in the 60s! In 1961, Field Archery is introduced properly and there is one designated place to shoot bows. 2 years later, improvements are made to the Archery shed. Then next year in 1964, 6 new bows are purchased for the campers. In 1965, target dollies/carriers are purchased $117.00, and a backdrop net is set up at the back of the range to stop arrows. Finally, in 1966, the target archery range is doubled in size, with an established permanent firing range.

Stepping into the 70s, girls can finally be seen shooting on the archery range! Other than a whole new demographic coming to camp, new bows are purchased in 1971.

Nothing new is recorded for Archery in the 80s, but look at these kids shoot!

And we made it to the 90s! A few small changes happen and the range slowly starts to look like we know it today. In 1995, New archery targets are purchased. Years later in 1998, new games take archery off of the range and onto the soccer field for a time! And at the end of the decade in 1998, 5 moveable targets replaced on the range,

Almost at the end, coming into the early 200s! In 2002, new bows, arrows, and target faces are added to Archery. A year later in 2002, the outside storage center for targets is built, no more wet targets! In 2004, we brought back field Archery will return for Foley’s 80th anniversary. Also that year 20 recurve bows are purchased. Then in 2009, deer, antelope, javelin, and 10 point bull’s eye targets are added to give campers a variety of things to shoot at.

We have arrived to the present day! A few last things are added to complete the archery range as we know it. In 2013, new 3 dimensional animals (Zombie,  Mini Polar Bear, Giant Mosquito, Stegosaurus, Badger, , Poison Frog) are added and the old ones are retired to the paintball fields. In 2018, new recurve bows are purchased. And that’s all there is folks! Archery has always been a staple activity here at camp and we don’t expect that to change anytime soon.