What would they do? 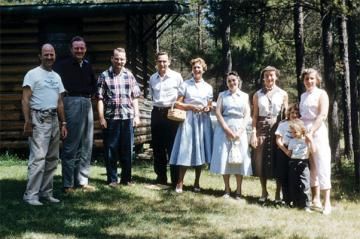 Camps have been facing the challenge of deciding what the next step is for over 6 months now, in the face of this pandemic. In tumultuous times, we often look back and ask what the people before us would have done in our situation. Steve Purdum, the owner, and Director of Camp Mishawaka, recently wrote an article after finding a photo that included Camp Directors from the 50s, including Camp

Foley’s previous director Bob Schmid. He was inspired by the challenges they must have faced in their own time as camp professionals. Bob Schmid, Marie Schmid’s father, and Alli Faricy’s grandfather lead Camp Foley from 1949 to 1973 and withstood many challenges of his own.  Mr. Purdum poses the questions… What would they do?

Here is a portion of that article…

I sent my cohort of Minnesota camp directors a photo of camp directors and families from the 1950s, taken during the annual gathering after the summer sessions to share what worked, what didn’t, and collective concerns as they looked forward to the next season and beyond. “What would they do?” I asked. We were discussing our concerns about how (or if) we could run our traditional summer camp program in light of COVID-19.

For a number of us, the individuals in the photo weren’t just camp directors; they were our parents or grandparents. For me, they were legends — several of whom I had the privilege to meet — though I knew most only by reputation and legacy. The photo was most likely taken by Theodore “Cap” Cavins, Camp Mishawaka director from 1941 to 1975. Collectively, even as this photo was taken, they probably had more than a century of experience in the camp field and included two future presidents of the American Camp Association. Many of them steered their camps through the uncertainty of World War II and polio.

I received a response to my question from Marie Schmid of Camp Foley and daughter of Bob Schmid, who was in the photo. She said, “I believe they would persevere, keeping in mind the well-being of the campers and staff and the mission that they dedicated their lives to.”