A History of Sailing 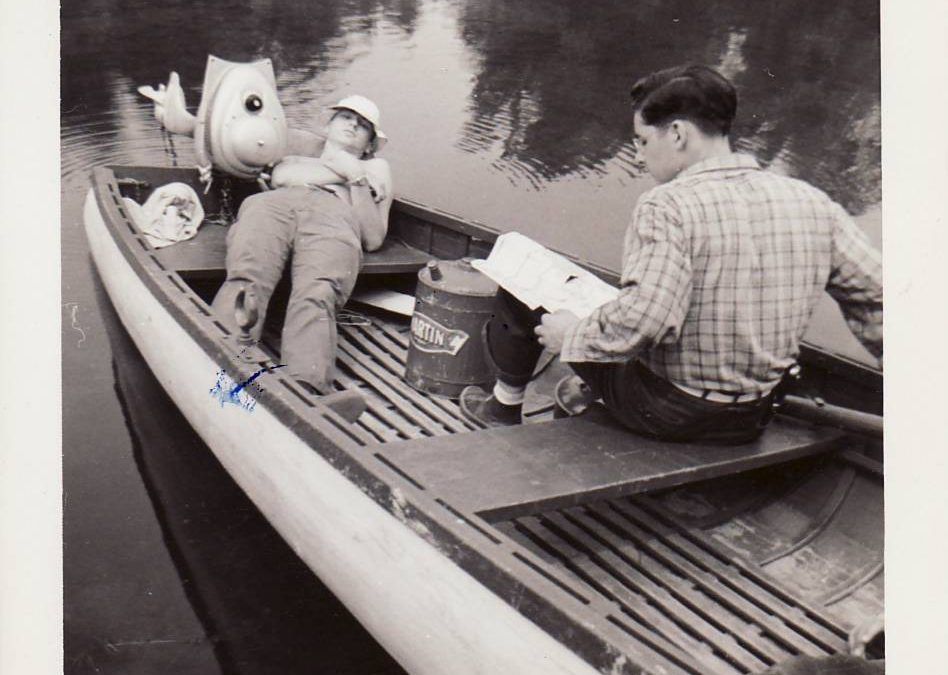 Welcome to the latest of our Historical Blogs… Today we are taking look at Sailing through the years here at Camp Foley!

It’s one of the most popular activities at camp and is the only activity at camp you can take two periods of. Campers have a choice of using our big Hartley boats or the smaller bics. The bics work better for younger campers, as they are smaller and easier to control when on the water. The Hartleys are the newest version of true sailboats offered at camp. They are bright blue and impossible to miss when the campers are sailing them out on Whitefish lake.

Sailing has been offered at camp since 1946, with camp having a variety of sailing crafts over the years. Let’s check out some of these BOATS…

We start off in the 40s. We don’t have any pictures of the first sailboats that were acquired in 1946, but that is the year we believe Sailing first came to Camp Foley. Here instead is a hilarious picture of some counselors being lazy on a motorboat!

1950s
As we enter the 50s, the sailing program at Camp Foley really starts to take off. In the year 1950, sailing is offered to only intermediate and strong swimmers. In the same year, a new sailboat is added to Camp under mysterious circumstances. The caretaker Esti insisted it was a mistake and we no record of actually buying the sail boat, SPOOKY! Also in 1950, the sailing program adds its first awards that campers can earn. They are Able Seaman, 2nd Class Skipper, 1st  Class Skipper, Boatswains Mate, and Boatswain. In 1956, Camp adds a new fiberglass sail boat, bring the grand total up to three boats. Also in 1956, Camp Foley participates in its first Inter-camp Sailing Regatta against Camp Lincoln. AND FOLEY WON!!!!
1960s
And we arrive in the 60s! Throughout this decade camp gets some new boats and participates in more sailing Regattas! In 1960, a Stamm fiberglass sailboat is added and camp begins rebuilding the old plywood Miller-Haxton boats. In 1963, the  First “C” scow is purchased, measuring 20 feet. It has a checkered pattern and cost $1720.00, what a deal! Later on, in 1967, camp purchases a new Johnson X Boat, made of fiberglass, that replaces the old wooden Miller-Haxton boat, They got it for $1070.00!
One year later camp also replaced the C boat mast, which had snapped in two, during the summer in 1967.

We made it to the 70s! We now see girl campers sailing right along with the boys! We also see color photography become more widely used, giving some gorgeous pictures of these sailboats on the Lake. Minor improvements are made to the C boat and 4 more sailboats are purchased in 1970 and 71. In 1978, spinnaker sailing is added to the camp. And at the end of the decade, we see 2 more sail boats added to camp, an E boat and Tlaloc.

Now we arrive in the 80s! In this decade we see again the retiring of certain boats and the purchase of new ones. In 1980, sailboarding offered for the first time, as is Sil Racing clinic. The Samoset boat is retired and replaced by a boat called Foxfire. In 1981, we also say goodbye to the checkered sailboat and add a new boat to the marina called the Hobie Cat. In fact over the next 6 years, several new boats are added to Camp Foley, including 1977 Melges C-Scow, Vanguard 470, White Lightening, Shatzee, Tanzer 22, and 2 sunfish sail boats. In 1987, after only 5 years with camp, the Hobie Cat is sold.

Rolling right into the 90s, we see more boats transition in and out of Foley. Right in 1990, a new X-Boat replaces the boat Windsong, and a C-Scow is donated by Chrissy Burnett. In 1996, a new award system is put in place and a shift in teaching style to smaller boats is done to focus on all campers learning to sail. It is not until 1997, that camp finally makes it mandatory to wear water shoes or aqua socks when sailing in the sail boats. Also in 1997,  the Sunfish boats are sold and replaced with 6 Optimists.

We are almost to the end but first, we have to contend with the early 2000s! Sailing looks very familiar at this point with only a few exceptions. In 2002, two new capri sailboats are purchased for camp. The next year in 2003, Camp Foley starts to offer another sailing class besides sail racing, called “Sailing for Fun”, which had a less competitive edge to it and allowed older campers to sila the big boats without having to focus on racing or take the class for two full periods.  In 2004, Mangos become a huge hit, when the options are sold and replaced with these yellow boats. These yellow boats are used by the younger campers who want to try sailing. In 2007 and 2008, the camp acquires 3 more sailboats, including 2 JYs for campers.

And here we are a the finish line! We arrive to the current years of camp and see that sailing is just as popular as it has always been. To catch everyone up to the present, in 2014 4 new JYs are purchased and live at camp until 2016. In this year the JYs are retired and replaced with 5 Hartleys, which are still the current sailboats today. We also say goodbye to the Mangos and say hello to ur Bics! The Bics are the smaller sailboats used by our younger campers. Sailing is an amazing activity here at Camp Foley and we can’t wait to get back on the water in 2021!