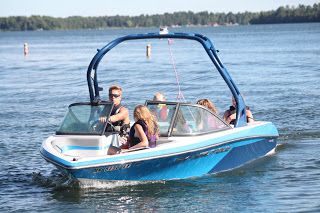 If you have spent a lot of time at the Marina, particularly on the ski boats, you quickly become familiar with the different quirks and personality traits of each boat. The three beautiful ski boats we have are like people, each has an individual and distinct personality and therefore they must be treated accordingly. In this blog, I will delve into the unique and complicated nature of each boat, in order to help us all respect and understand each craft more fully. However, first I believe it is necessary to explain my qualifications to take on this challenge of explaining the particular traits of each boat. According to my (very rough) calculations, I have spent at least over 300 hours driving these boats, not counting the countless hours cleaning, gassing, and maintaining them. I have been through a lot with these boats. They’ve been by my side during the sunniest of days, in the thick of thunderstorms, in glass-like calm waters, and in waves that could rival those of the ocean. Every year I know I spend more time with the boats than some of my fellow counselors. During this time, I feel as if I have gotten to know the Camp Foley fleet of ski boats very well. Join me on this journey as we investigate what makes each magnificent unique.

Let us begin with the boat that has been a part of the Foley Fleet the longest, Reggie. The Red Ski Nautique has been a part of the Foley Family since 2015. While 5 years does not seem like a long time for a boat to be around, we ask a lot of our boats here at Foley, and his age is starting to show. However, do not let that fool you, Reggie is without a doubt the leader of the fleet. While Reggie has lost some of his original shine and has a few scratches and screws loose, he still is arguably the most dependable and consistent boat at the marina. Reggie never complains and is always capable of getting the job done. He does not like extra fuss and is more focused on doing his job than showing off (that is why we had to take a picture of him in storage because it was too hard to find one of him on the lake). Reggie also does have plenty of reason that he could show off, which makes him so much more admirable. While the other boats can sometimes struggle and need to take a period or even a day off, Reggie is always ready to pull campers behind his powerful engine at a moment’s notice. It is clear that the other boats look to Reggie for guidance and advice, as he is an exemplary role model of what a dependable and consistent boat should run like. Reggie is everything you could ever want in a boat, while he may not have the biggest engine, most features, or best design, he always gets the job done well, never has trouble getting started, and is a role model to all watercraft on the lake.
Chester (Blue Ski Natique)

We now come to Chester, perhaps the most complex boat of the bunch. Chester is like a wild leopard; he is fast, agile, powerful, yet compact. Chester can pack a punch and he knows it. However, he also can be prone to having off days and not knowing his own limits. While he is no longer as reckless as he was in his younger days, you can tell that his wild days as youth are starting to take a toll on him. However, Chester is still far and away from the fastest and most agile boat at the marina. While Chester has the ability to be the best at the lake, he is a hard boat to master. On the outside, he is a flashy outgoing boat who likes to show off his abilities, but that is just the tip of the iceberg. On the inside, there are many more layers to Chester. He requires loyalty, respect, and focus from the driver. If you are not giving your all while driving Chester, he can be difficult to understand and drive and he will not give you his all in return. However, if you treat Chester with respect and give your all while driving or being towed behind him, it can be one of the most enjoyable experiences of the summer. Chester is a beautiful boat who knows his strengths, but he will only respect and work best for those who take the time who get to know him and understand him.

The third and final boat in the Camp Foley Fleet is Monty, more commonly known as the Moomba. The Moomba is still very young and his youth is seen all the time. His big powerful engine often gets him into trouble, especially on wavy days. Monty still does not quite understand how high the Whitefish waves will propel him, and too often he tries to power through them. Anyone who rides in Monty knows that he has a lot to offer, but like a young child he also requires lots of care to keep going. Monty often tries to do too much at once and proves time and again that he can be too powerful for his own good. However, since he is the newest boat, he is still learning and each year seems to be getting better. It is clear that Monty will one day be the leader of the Marina, but for now, he is still the wild youth that gets himself into trouble. We hope that as Monty grows up he learns his limits, yet never loses the youthful and vibrant energy that he has today.
I hope that you enjoyed this dive into the unique personalities of the ski boats, and now better understand each boat at the Marina. While each boat is very unique and has different strengths and weaknesses, they all share one thing in common. Their favorite thing in the whole world is pulling campers in all the different water sports, and they can not wait for them to return as soon as possible!