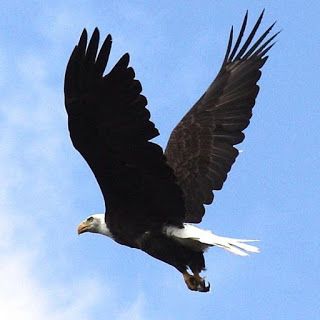 Here is a true Throwback Thursday to our most viewed blog! This is a Creature Spotlight all about the bald eagle. All the pictures of Eagles were taken by our Director Alli Faricy. You can find more of her photography at @eightlegsphoto on Instagram.


Ever seen the majestic bird of prey that represents America as its National
Symbol?  They are an impressive sight!  We are lucky enough to see them quite regularly out on nature trips and during our environmental education programs here at Camp Foley.  In fact, camp director Alli Faricy has snapped photos of them in mid-flight around our Whitefish Lake on several occasions.

With their large brown bodies and snow-white feathered heads, bald eagles are unmistakable and easy to distinguish from hawks, vultures, and other large raptors.  They can grow to 40 inches in length and have a huge wingspan of up to 7.5 feet.  Perhaps this is why they make the largest nests of any bird in North America.

Bald Eagles can be found from Canada to Northern Mexico, but prefer to live near oceans, lakes, or rivers because they feed primarily on fish.  Using its keen eyesight, they can spot a fish several hundred yards away, and swoop down and pluck it from the water with its powerful talons as the fish comes up to feed.  These powerful birds have been clocked diving through the air at up to 43 mph and flying away with a fish in their talons at 30 mph.

It is believed that Bald Eagles mate for life, and have sometimes been observed hunting together.  In these cases, one eagle distracts their potential prey while the other swoops in to pounce on it.  While a large percentage of the bird’s diet consists of fish and carrion (the carcasses of dead animals that have been left behind by other predators), they also catch and eat small reptiles like snakes and lizards, and mammals such as rabbits, squirrels, and raccoons.  Hungry bald eagles will sometimes hunt larger animals too and have even been observed successfully catching an adult trumpeter swan in mid-flight.

As the National Bird of the United States, the Bald Eagle is protected by federal law.  Unfortunately, illegal hunting and the use of dangerous crop pesticides in America during the 1950s, ’60s, and 70 are nearly caused this beautiful creature to go extinct.  By 1950, there were only 412 pairs of bald eagles left in the entire United States!

Fortunately, through the creation of stronger, stricter poaching laws, the banning of harmful chemicals like DDT, and the efforts of raptor rehabilitation centers across North America, the Bald Eagle population has rebounded to over 100,000 birds.  And the third-largest concentration of Bald Eagles is right here in Minnesota (behind Alaska and Florida), where it is estimated that about 1,312 pairs live in the wild.
The Bald Eagle is sacred to many Native American cultures, and some even saw it as a wise and powerful messenger from the spirit world.  This is one of the reasons eagle feathers and talons (claws) are used in some traditional Native American ceremonies and dances.

Our Founding Fathers chose the Bald Eagle to represent our country as our National Symbol because the eagle was a symbol of the ancient Republic of Rome – the democratic government of the mighty Roman Empire run by a council of senators (before Rome became a dictatorship).  On the Presidential Seal of The United States, the bald eagle is represented holding thirteen arrows in one talon and thirteen olive branches in the other.  The arrows and olive branches represent America’s thirteen original colonies and symbolize that while the United States prefers peace, it will fight to protect the safety and freedom of its people.

So the next time you’re out on a trip or participating in a water activity at Camp Foley, be sure to keep your eyes peeled. You just might see one of these majestic creatures.
For more info about Bald Eagles, check out The Minnesota DNR, The National Eagle Center, or these cool videos of Bald Eagles nesting right here in Minnesota!