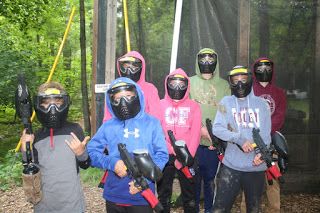 In this month’s activity spotlight, we will be focusing on a Camp Foley favorite… PAINTBALL!

This activity has been around since 2005, and many campers since have passed through the gauntlet and survived. For those living under a rock, paintball is a competitive team shooting sport in which players eliminate opponents from play by hitting them with spherical dye-filled capsules, or “paintballs”, that break upon impact. Usually shot using a low-energy air weapon called a paintball marker that’s powered by compressed air. This marker was originally designed for remotely marking trees and cattle.

The game was developed in May 1981 by Hayes Noel (a Wall Street stock trader) and Charles Gaines (an avid outdoorsman and writer). They were best friends, and Noel and Gaines argued about who would be better suited for survival, a city dweller who knew how people’s minds worked (Noel) or a man who had spent his youth hunting, fishing, and building cabins in the woods (Gaines). The two men saw an advertisement for a paint gun and were inspired to settle their argument with paintball markers, eventually creating the sport that is now called Paintball.

Here at Camp Foley, we have two different courses for the campers to play on, a speedball and woodsball arena. The speedball course is full of propped up canoes, barrels, and even old archery foam animals for campers to hide behind and creep up on opponents. The woodsball course is much more natural, filled with overgrown vegetation and logs covered in moss. The woodsball course is a bit more tick and mosquito heavy but is much bigger and demands more strategy when playing. Each course offers its unique playing field, and campers get the opportunity to play many different games on each one.

Each time before play begins, the kids are shown an infamous safety video narrated by the one and only Mr. Squeegee. This video may be paranoid by some older campers, but it covers all the rules of the game and allows the counselors a moment to show the campers that safety is our top priority.

Cheers to lots more Paintball to be played!