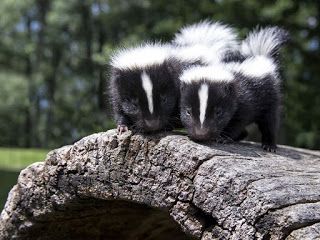 “You won’t believe what happened to me last night. I was out on one of my nightly walks around camp when my life flashed before my eyes. Well, that might be dramatic, but I did almost step right on a doe feeding on grubs near the Gaga Pit. I know you’re thinking, ‘What!? Deer eat grubs?!’ But I’m not talking about deer. I’m talking about skunks. Did you know skunks are also referred to as buck and doe? Anyway, I look down and see a set of eyes peering up at me, I whip out my flashlight, catch a glimpse of black and white, and I bolted out of there at a dead sprint. I didn’t stop until I reached the top of the Marina. Again, a little dramatic, but I had to know I was safely out of reach of that putrid spray.”

A few summers ago, those are the words Alli shared with us one morning that started our little love affair with a really interesting camp creature: the striped skunk. As a team, we didn’t know all that much about skunks beyond the fact they are capable of shooting out a disgusting musk, which was something we did not want to experience!

But what was bringing these little guys into camp?

Grubs. It was a summer with a high grub population, which allowed for a boom in skunk reproduction and activity. As a nocturnal creature, skunks would wander into camp at night to dig for grubs in the soil. Thus leading to Alli’s encounter with her new skunk friend. These encounters happened multiple times throughout late summer and into the fall, but the skunks never felt threatened enough to spray, allowing us to make it out of the summer unscathed. Thankfully, this skunk population has moved on and our skunk sightings have been infrequent as of late.

Skunks maybe aren’t the most desired visitor, but they sure are an interesting critter to learn about, especially when it became clear they weren’t here to maliciously spray their rancid musk. For more information on skunks, check out this Minnesota DNR: Striped Skunk info page!

I’ve also heard skunks can make good pets… If you have more info on this, I’d love to hear all about it!