It is so cold the ground is quaking… 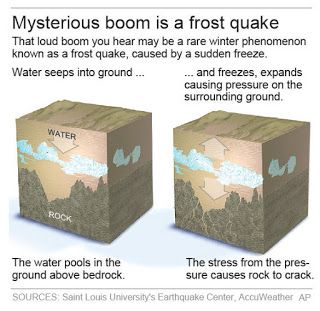 A sudden cold spell has graced Foley with its lovely presence. We don’t know about your feelings on the cold, but we were sure enjoying the 25°F days that we were fortunate to see during most of December. Then came January.  Frigid temperatures did not come on gradually, it went from nearly 30°F to below zero overnight.
This drastic change in temperature did much more than send frosty chills through all the brave souls

who ventured out of their warm dwellings – it caused some crazy activity to occur beneath our feet and echo throughout the buildings in the camp.

Frost quakes or cryoseisms. is a nontectonic, seismic event that may be caused by a sudden cracking action in frozen soil or rock saturated with water or ice.
These frost quakes occur infrequently across the Midwest, New England, and eastern Canada. We are now able to say we have felt this geologic phenomenon here at camp (at least that is what we think they are)! While sitting in the office on a calm Friday we heard a crack and felt the building shake. This occurred again over the weekend, then a third time the next Wednesday. After some research, we narrowed it down to this frost quake concept. Some individuals who have felt a frost quake have described the sounds as “two bowling balls being knocked together,” “a bomb going off,” “gunfire,” “my house is collapsing,” but we would describe our experience as hearing a loud crack and feeling the building give a quick shake- nothing too extreme. All episodes happened very quickly, not lasting more than a couple of seconds.
This winter has been full of weather changes. We received some snow early, which melted quickly. Then some rain came through and above-average temperatures followed. With this moisture entering the soil and the extreme cold approaching – the ground was being set up perfectly for a frost quake scenario. Once the below zero temperatures arrived, the melted snow and rain that seeped into the earth began to freeze and expand. This expansion ultimately caused the frozen soil and rock to crack underground in a loud, explosive fashion, thus causing the vibration necessary for the buildings to shake.
Frost quakes are thankfully not known to cause serious damage to buildings, but it was definitely causing for us to do some research to figure out the cause of our buildings shaking!