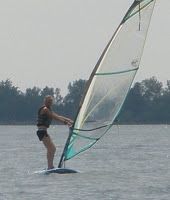 2013 counselor, Emilia Kronschnabel, reflects on why she loves

Windsurfing so much, and in my professional opinion, her love affair is completely valid. (As Windsurfing is absolutely the best activity offered at the Marina. But I, Krista may be biased.)

So I love camp, who doesn’t? One of the many reasons I have come to love camp over the years is the ability to learn new skills while at camp. I was a camper for 11 years, but it was my first year as a counselor that I realized how much fun it can be to teach new skills to campers. I teach Windsurfing, and though Courtney may say Sailing is better, I believe Windsurfing is the best activity to take down at the Marina. (So come take it if you haven’t yet!!) I learned to Windsurf at Foley, and every day I teach it, I love it more because I’m able to teach campers a skill they probably wouldn’t have learned anywhere else.

When a camper pulls up the sail successfully for the first time and begins to go, I think I get as much satisfaction out of just watching them as they do actually sailing.  My time learning to windsurf began while I was young and inexperienced, and Christine McGarvey (one of the AD’s this summer) taught me how using the old simulator on Foley green. I signed up for Windsurfing because I needed a water activity, I thought Christine was cool, and I had never tried it before. I ended up loving it and signed up for it every sign up for the next eight-or-so years. When I was finally able to successfully turn around and not have Christine tow me in it was a great day. I came to love the sport and developed some quality skills, and now I love to teach it.

Last summer, I was lucky enough to have some campers that reached that same goal. They would go out at the beginning of the class period, cruise far out into the lake, and then make their way back. Don’t get me wrong, I love towing windsurfers in too. I get an extra boat ride where I get to learn more about the campers in my class, but seeing the look of success on someone’s face when they’ve accomplished something for the first time is truly magical. Learning for myself as a camper was one thing, but watching others learn is much more satisfying. Foley gives campers the ability to make wonderful friends and to learn some amazing new skills. Signing up for something new can open up a new world for campers, as it did for me, and as I’ve seen it do for others. So this summer- try a new activity- it might just become your favorite!

Did you ever try an activity for the first time and have it become a new favorite? What activities are you excited to get back to, or to try, this summer?