From Campers to Counselors 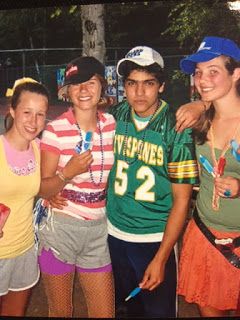 Everyone knows that the best kind of friend is a camp friend. For whatever reason, you make some of your best friends at camp. Many of our counselors from 2013 were past Foley campers as well. Berns Villareal, talks about what it’s like making the transition from camper to counselor, and how special it can be to make that transition with your friends from camp.

After six summers as a camper, it was hard to see the camper days come to an end and say goodbye to those friends that I had come to love and admire. We, as great friends, promised to see each other again and to stay close through time and space… “Always and forever,” we said. Little did we know that chance, destiny, and life would bring us together sooner than we expected.

Three years later we found each other standing upon a familiar sight: Camp Foley. It was here, where it all started, that we were meant to live this new chapter of our lives, not as campers but as counselors. For me the weeks leading up to THE DAY (when we would meet in camp again) were the hardest. Thoughts started running through my head. “Will it be like the old days?” “Will we be as close?” “Will we pick up right where we left off?” “What if we’ve changed a lot?” “What if we’ve changed too much?” I was scared of what might happen. It had been three years since we had seen each other, three years of stories and experiences, of building and living lives without each other… How do you pick up the threads of an old life? How do you go back in time and get it all back?

Then a memory hit me. I remembered my first day as a camper, which was pretty much like the first day of all my summers at camp. I would be nervous to find out who would be in my cabin, or worse that I wouldn’t know anyone at all. But in camp getting along is a natural thing: It’s as if the air that flows through camp is a magical one that makes everyone accept you for who you are and like you for it. It was then that I came to understand that we don’t have to go back in time, we can live the days to come as if time doesn’t exist, as if camp was never going be over.

Finally THE DAY came when we were all breathing the Foley air again and the excitement was overflowing our bodies. We all had many great stories, memories, and experiences to share with each other, and as I had remembered, it was as if it was just yesterday that we all had been together. AMEN