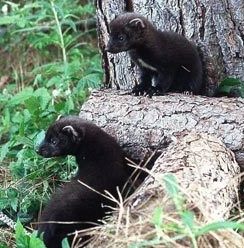 Let’s start this off by clearing a few things up. The fisher (sometimes called the fisher cat) does not eat fish, nor is it a feline. So, we’ve already confused a whole lot of people just by introducing this creature’s name. The name comes from colonial Dutch fisse or visse do to it’s resemblance to the European polecat. In French, the pelt of a polecat is called fiche or fichet. It is sometimes called the fisher cat for unknown reasons, but it is comparable in size to a domestic cat, so maybe that’s it?

The fisher is a member of the weasel family and resembles a very large mink. Adult fishers are 24 to 40 inches long including their long, bushy tail. Females weigh six to eight pounds, and males can weigh up to 18 pounds. Fishers are very agile and active predators. It is an excellent tree climber. Some of its favorite foods are mice, squirrel, and porcupine and it shows a preference for snowshoe hare. If you read about the bobcat, the Camp Creature a few weeks ago, this diet will seem familiar to you. Bobcats and fishers share the same habitat and eat the same foods, leading to some conflict between the two animals.

The fisher’s fur changes with the seasons and males have coarser coats than females. It ranges from deep brown to black, and the coat appears darker in the winter contrasted against the white snow. Its coat is dense and glossy in the early winter, and in the summer, the fur color is lighter. In late summer fishers undergo molting. The underside of the fisher is almost completely brown with some patches of white fur. The face and shoulders can be silvery gold. The fisher has retractable claws, and its feet are disproportionately larger than its legs so that it can move on top of the snow. Fishers have extremely mobile ankle joints, which can rotate their back paws almost 180 degrees. This allows it to move through tree branches and climb down trees head first!
Fishers live in a variety of forest types in northern Minnesota and are sometimes found in western and southeastern Minnesota. It is a fairly solitary creature aside from breeding season and when the young are with their mother. Fisher fun fact: Female fishers are pregnant for 350 days of each year! Yikes!

In the early 1900s, fishers were nearly extinct in Minnesota. In the early 1900s, fisher fur was very valuable and thus became popular with trappers. The highest-quality furs are from the winter trapping season, and the fisher is easily trapped. In the 1920s and 1930s, the average price for a fisher pelt was $100 US, which is about $1,000 today. Since the late 1970s, the population in Minnesota has remained at more than 10,000, which is enough to support a regulated trapping harvest of about 2,000 each year. The price of fisher fur has greatly declined due though, so trappers are definitely not raking in the big bucks.