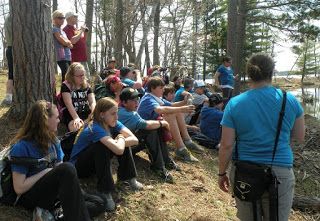 Last week we had an AWESOME time with sixth graders for five schools in Minnesota (St. Bartholomew, Annunciation, Holy Trinity, St. Boniface, and Marquette) at the Foley Environmental Education Center. Not only did we have some super fun students in the camp, but we did some pretty cool things as well.

A Day at the Enviro Center

Each day students woke up in their cabins and then cleaned their cabin (in hopes of winning the Ms. and Mr. Spic and Span Award). Students then made their way to the Weather Station to predict what the weather would be like for the day. Each day at Foley we focus on a different character trait – Caring, Respect, Responsibility, Trustworthiness, and Citizenship – so before breakfast each morning a couple of students would do a reading about the day’s character trait. After each meal, Dr. Earth would visit to see how wasteful we have been. Dr. Earth would also remind everyone to stay on the paths (so we wouldn’t become “Soil Destroyers”) and to turn off lights when we left a building (so we wouldn’t become “Energy Wasters”) Throughout the day students attended academic classes and later in the day had rec time (free time to go climbing, shoot at archery or play other games) and late-night adventure (going to look for snakes or frogs, large field games, twilight canoeing, etc.). On Wednesday night, the students went to various campfire-sites for Team Hotdog where they cooked hotdogs and s’mores over a campfire for dinner.

Aquatics & Wildlife Viewing: Students traveled to Hidden Lake to take in some beautiful scenery and canoe. Using binoculars students were able to spy some pretty cool things including two eagles’ nests. As students traveled to Hidden Lake and canoed around they saw a variety of animals including eagles, painted turtles, snapping turtles, deer, beavers, muskrats, and a variety of fish and birds.

Blind Hike: After every student put on a blindfold, they held hands and made their way through the woods without using their sense of sight and without talking! Over roots and rocks students used each other and their available senses to maneuver.

Critters: At critters, students learned all about the turtles and snakes in the Camp Foley Nature Center. Everyone had the opportunity to hold a Western Hognose, Pueblo Milk Snake, or King Snake. Plus they met Foley’s two turtles, a Painted Turtle named Muncher and a Snapping Turtle named Bowser.

Fish Survival: Students had a chance to get their science on while determining what kind of fish can survive in Whitefish Lake. Using samples of lake water, students went through several steps to come to a conclusion. about their fish.

Geocaching: Armed with a GPS (“Trust the GPS!”) and a partner, students navigated through the woods to Upper Tree Houses where the group met up. Students then used their GPS to find different caches located around the treehouse.

Geology: Students learned all about ROCKS in geology. They learned about how different types of rocks are formed, how the continents formed and separated, and all about erosion.

Micros: At micros, students had the chance to find microorganisms in water from a nearby Arrowhead Lake. Using their microscopes and their partner’s students recorded what they found.

Muck Adventure: The theme for this class seemed to be: How many worms can you eat? Students took off their shoes and socks, rolled up their pants, and waded into the below-the-knee deep water to explore the muck pond.

Solos: Probably the quietest academic class, students had the opportunity to spend some time in nature all alone, away from their classmates. Students could write, draw, read, or just enjoy their natural surroundings as they listened to the wind in the trees and the other sounds of nature.

Overall it was a great week! We are so thankful for everyone that helped make it possible (including Mother Nature who provided us with some beautiful, sunny days)! We hope you left the Foley Environmental Education Center with as many great memories as we did!