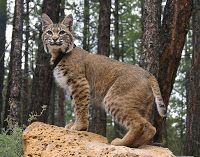 This week we’ll be introducing you to the bobcat! An “elusive” creature as Camp Foley’s Director, Alli Faricy, put it. According to the Minnesota Department of Natural Resources (DNR), “Few humans ever see a bobcat in the wild.”

The bobcat is the smallest of all four species in the Lynx genus. Bobcats can weigh between 10 and 40 pounds and stands one to two feet tall. Generally, it is tan to grayish-brown on top with a white belly and it has
black streaks or spots. The ears of the bobcat are black-tipped and pointed, with short, black tufts.

First bobcat fun fact: Bobcats from desert regions of the southwest have the lightest fur, and the northern bobcats from the forest regions have the darkest!

Bobcats have excellent hearing and vision, and a good sense of smell. Plus, it is an excellent climber (they have been known to climb trees and catch and eat porcupines!) and can swim (but tends to avoid water)! The bobcat is muscular, and its hind legs are longer than its front legs, which gives it a bobbing walk. However, this is not why the animal is named the bobcat…

Second bobcat fun fact: Bobcats are named for its “bob” tail, which looks as though it has been cut off at about five inches long!
Bobcats eat a wide range of small and medium-sized prey such as mice, snowshoe hares, squirrels, birds, and white-tailed deer fawns. The bobcat needs to watch out for coyotes and fishers, but fishers and coyotes should also beware of the bobcat.

Bobcats used to live across the state, but now it is seldom found in southern Minnesota. It most commonly lives in the woodlands of north-central and northeastern Minnesota. Bobcats are a designated game animal, meaning they can be hunted, but only during the prescribed seasons. It is typically hunted – with hounds – for its fur.
In a Shawnee tale, the bobcat is outwitted by a rabbit, thus resulting in the bobcat getting its spots. After trapping the rabbit in a tree, the bobcat is persuaded to build a fire. The embers then scatter on its fur, leaving it singed with black spots. The bobcat, lynx, and coyote are present in a lot of Native American Mythology and national folklore.
Final bobcat fun fact: The bobcat we see in the western Great Lakes area (including upper Michigan, Wisconsin, Southern Ontario, and Minnesota) is the L. r. superiorensis. It is one of thirteen bobcat species.