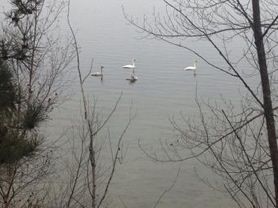 The Trumpeter Swan averages about five feet in length with a wingspan of six to eight feet! Can you imagine comparing this large bird to one of the smallest Fox campers? The Trumpeter Swan was a very common bird in Minnesota until the mid-1800s when central and western Minnesota were being settled. The bird then became over hunted. In 1984, when the state conducted a review on the status of the bird, they discovered had disappeared completely from the wild. Beginning in the late 80s, specific efforts were made to reintroduce the Trumpeter Swan into the wild in Minnesota. Currently, there are more than 2,400 free-flying birds in Minnesota. The swan is still considered threatened in Minnesota.
The interesting thing about the Trumpeter Swan’s reintroduction into the Minnesota wild is that the birds do not migrate in the winter. About 150 years ago, the swans would migrate to Missouri, Arkansas or Texas in the fall and return when the ice began to melt off of the lakes. Today though, many Trumpeter Swans in Minnesota do not migrate south in the winter. The Trumpeter Swan can be found, during different times of the year, throughout Canada and the northern/central United States. In the warmer months, the swan lives in freshwater marshes, and along with ponds and lakes. Through the winter it lives on lakes, streams or rivers. Their nests look like a large, open bowl made of aquatic vegetation or grasses lined with down and somebody feathers. These nests are typically found on elevated sites, surrounded by water, such as a beaver lodge (like the beaver lodge on Hidden Lake!). Trumpeter Swans have a diet almost entirely of aquatic plants. In winter, they may also eat grasses and grains. The young are fed on insects, small fish, fish eggs, and plants to provide more protein in the early months.
Fun fact about the Trumpeter Swan: It mates for life! Most pairs are formed from about four to seven years old, although sometimes as a late as 20, and sometimes, if a male Trumpeter Swan’s mate dies, he may not pair again for the rest of his life!
For more information on the Trumpeter Swan, and the continued conservation efforts, check out the DNR’s website. Have you ever seen a Trumpeter Swan in the wild?