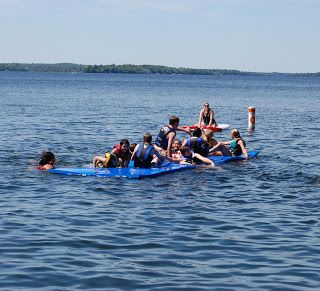 How far can you spit a raisin?  If you’re a Fox/Coyote girl and can spit one further than 20 ft, you’re the new record holder! How long can you stand on/roll the log without falling? If you’re a Wolf boy and can stay up there longer than 2:51, consider the record yours! Do you and a friend have mad frisbee throwing skills? If you’re both Wolf girls and can throw one back and forth more than 96 times, you’re going down in the Foley record books! Are you a Fox/Coyote boy? Is your friend a Fox/Coyote boy? If you answered YES to that and can run a three-legged race faster than 13.63 seconds, you’ll be a Foley record holder!

Here is the exciting news: This summer, we’re adding some brand new, never been beaten before records. Will you be the first person to break one of these records? If you’re up to the challenge of rolling an orange across the Soccer Field with your nose you just might be! But wait! There’s even more exciting news: 2013 will be the first year we’re attempting large group records. There is even a rumor going around that we may attempt to break an actual Guinness World Record. I’m currently trying to find out if there’s any truth behind this rumor. Stay tuned for my findings.

Alas, if you had your heart set on beating the record for Lowest Limbo or Tennis “Ups,” it’s just not going to happen. This year Foley is retiring five records that are considered to be unbeatable. Congratulations to the following people who will forever hold the Foley record: