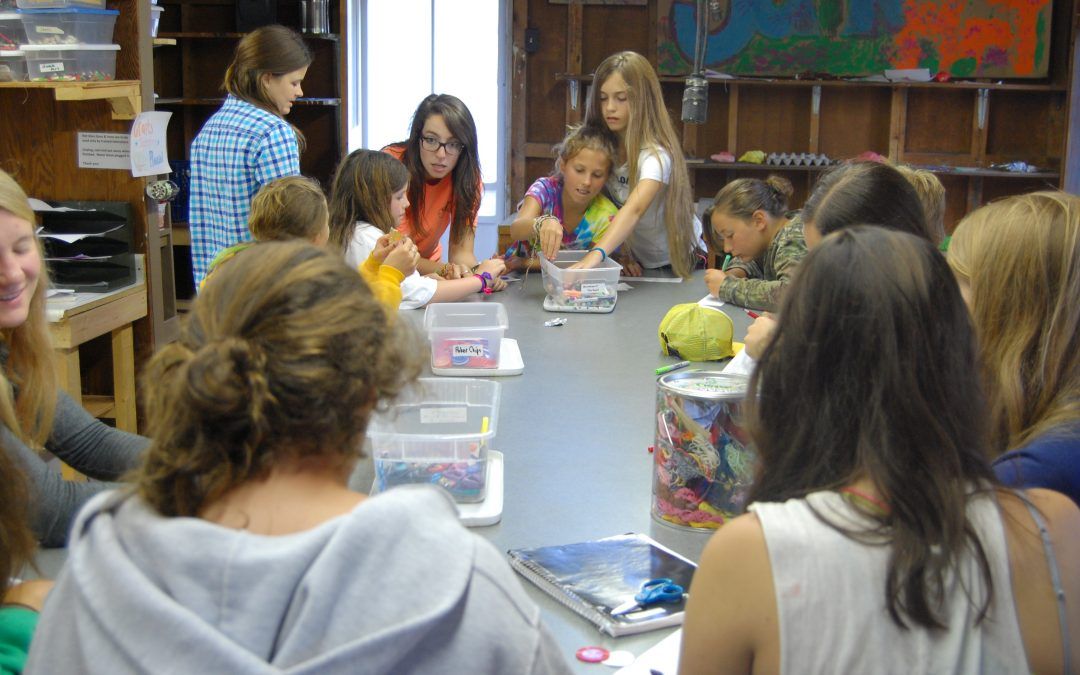 Crafts has a fairly long history at Camp Foley. One of the first mentions

of crafts in a newsletter was back in
1957 when Red Dawn, a full blood descendant of a Sioux Cheiftain came for a day-long seminar featuring feather crafts, headdresses and dancing. Again, in 1958 a newsletter describes some craft projects: lamps, lanyards, bracelets, and belts. Campers were also able to finger paint and create pine cone bird feeders. In 1978, after girls were spending summers at Foley, Art was available for girls and was held in the garage on the west end (currently known as the girl’s weight room). It wasn’t until 1987 that boys were allowed to take art. In 1994, Ed McGaa visited Camp Foley during the three-week session to share Native American crafts!

As we know, Crafts (and Art) has had many homes throughout Foley’s history. From picnic benches to an art tent outside of Osawaka, to above the Mid-Washo and even into Osawaka. But, in 2010, Crafts was given its own, dedicated building located where Shop was held for many years. I can’t speak for the Craft instructors or campers, but I’m sure they love the well-lit, larger space that the new building offers!


So, we know what Crafts is all about within the Foley community, but what is “crafts” in the outside world? According to Wikipedia, “A craft is a pastime or profession that requires some particular kind of skilled work.” I guess that makes sense. Historically, craftsmen were concentrated in urban centers as they depended on the exchange of goods to provide for their families (craftsmen could not be as self-sufficient as those involved in agricultural work). A craftsman did not simply become a craftsman. First, he would have to find an apprenticeship

and when that was complete, a journeyman in search of a place to set up a shop. Once, he established his own shop, he could consider himself a master of his craft. Obviously, this is a rather outdated practice, and today we consider crafting to be more of a hobby. Different types of crafts may include studio pottery, metalwork, weaving, woodturning, woodworking, glass blowing or glass art. It’s not unlikely that the more talented crafters are able to turn their hobby into a profession, especially with the use of the internet to sell their products.

Whether you consider yourself a “master of your craft” or someone who just enjoys let their creative juices flow every now and again, we hope you join in a Crafts class at Camp Foley. Who knows what you’ll make? The opportunities are endless as you let your creativity shine!