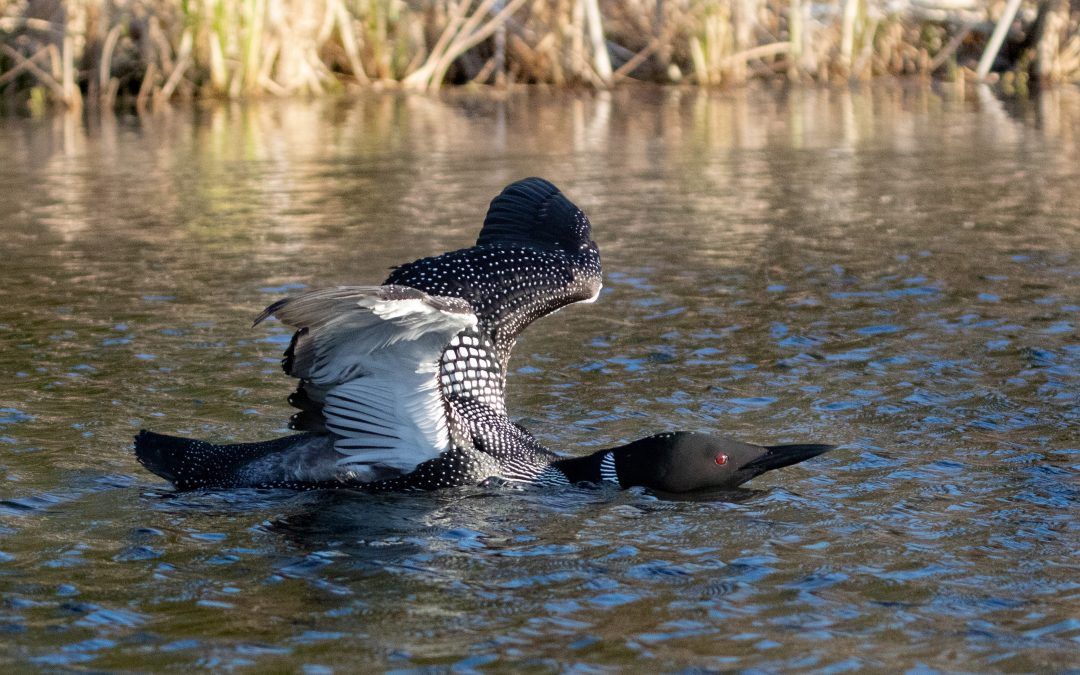 As the evening waves break across the shoreline of Whitefish Lake, a beautiful yet haunting sound can be heard echoing through the tall pine trees that guard the grounds of Camp Foley.  Again, the sound pierces through the silence: Woooo – oooooooo.  Along with the whine of mosquitoes, the calls of the Common Loon are the sounds most associated to summertime at Camp Foley and northern Minnesota.

Minnesota’s state bird, the Common Loon is, dare I say, a common thing for campers to see while at any water activity.  In fact, Minnesota has more loons, roughly 12,000, than any other state besides Alaska.  The Common Loon is slightly larger than a Mallard Duck, and adults weigh between eight and 12 pounds.  They have a very long, thick neck with a long, black bill, which gives them an awkward appearance when flying.  Most campers and counselors would recognize the Common Loon because of its black and white speckled plumage (the layer of feathers that cover a bird and the pattern, color, and arrangement of those feathers) and of course, its red eyes.  But did you know the Common Loon replaces its “summer” plumage with a molted grey “winter” plumage?  It’s only fitting that the campers and counselors of Camp Foley get to see the Common Loon at the pinnacle of its beauty.

The Common Loon spends the majority of its time on the water, only coming ashore to mate and incubate its eggs.  As a result, Common Loon has many cool features to help it better adapt to its aquatic environments.   The Common Loon is a very agile swimmer; the loon’s feet are positioned farther back on its body than most birds.  Additionally, unlike most birds, loons have solid bones.  These two features allow the loon to swim underwater like a torpedo.  In fact, loons can swim down to depths of over 200 feet and hold their breath for over five minutes.

As many of you may know, it’s pretty dark deep down in Whitefish Lake.  It has been theorized that the red eyes of the Common Loon enable it to see better while underwater.  This helps the loon locate various species of fish, a staple of its diet.  However, any camper who has taken fishing at Camp Foley can tell you that fish are very slippery creatures.  The Common Loon has a beak that solves that problem.  The inside of the Common Loon’s beak is filled with rearward-pointing projections, best described as very small teeth.  This adaptation, along with the loon’s unique tongue, helps the loon secure even the slipperiest of fish.

These adaptations may be very beneficial to the Common Loon while on the water, but they make for very comical takeoffs.  Like airplanes, loons need a “runway” in order to take off and fly.  The Common Loon will begin “running” across the water while flapping its wings, in an attempt to build up enough speed for takeoff.  The loon needs a runway anywhere from 30 yards to a quarter-mile long in order to gain enough speed for a takeoff.  Once in the air, however, the Common Loon can fly pretty fast.  Migrating loons are estimated to travel at speeds of over 70 miles per hour while on their way to the Gulf of Mexico, where they spend the winter months.

Camp Foley is committed to helping the Common Loon thrive.  During the summer of 2012, both groups of CIT’sdonated their time and helped the Minnesota DNR (Department of Natural Resources) obtain a rough population count of the Common Loons living on Lower Whitefish Lake.  Additionally, Loon Calling was an optional sixth-period activity, which was dedicated to teaching the Wolf campers about the life and various calls of the Common Loon.