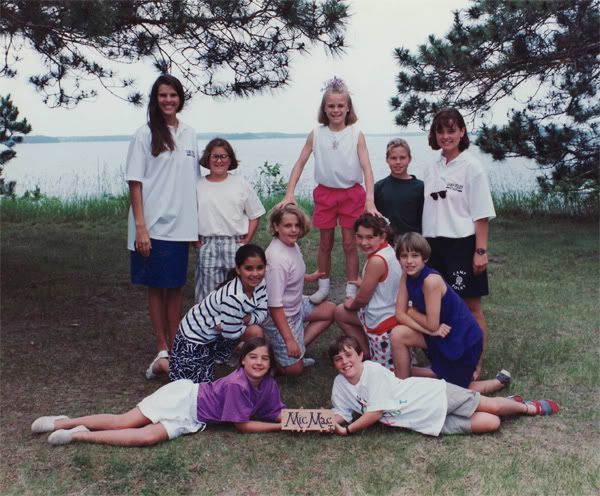 I have been at camp Foley for many years, and I often hear amusing camp stories floating around the office, but my quest to bring you blog-worthy tales of happenings from around camp brought me in contact with Kara Sime. Kara spent 3 summers with us (1991, 1992, and 1993) providing fun and guidance to Foley campers, and presently works as the Director of Human Resources for Agropur, a dairy Co-Op. She resides in Roseville, MN with the 2 significant people in her life, Ted and 2-year-old daughter Catherine.

Kara recites a story where her duties called for a little more than she bargained for…
It was the summer of 1991 and I was the counselor of 9-year-old girls in cabin MicMac. One night during the session we had a hike and overnight stay planned to the Tipi Village. Although it began to rain on our walk, our spirits weren’t dampened! When we arrived, I had a hard time lighting the fire due to the rain, but eventually managed to get it lit and cooked the hotdogs for the girls. Due to the rain, I allowed the cabin group to eat the hotdogs inside the tipi, and afterward, I made sure that the girls removed all the leftovers from inside.

During the night, the nine 9-year-old girls were fast asleep in a circle in the tipi with their legs pointing inwards and I was awoken by a strange noise coming from outside the tipi. I was a little spooked by this noise, and my main priority was the safety of my sleeping campers. I laid there stiff and awake while I thought of a plan. I sat up slowly, grabbed my flashlight, and for a fraction of a second, flashed it at the opening of the tipi. I was greeted by the unmistakable black and white color scheme of a skunk!
While I didn’t want to wake the kids, more importantly, I didn’t want the skunk to get any closer, or spray near the tipi. In the darkness, I started to lightly tap on the floor of the tipi (which was slightly raised off the ground) in an effort to scare the skunk away. The tapping was followed by ruffling noises from the skunk, so again I tapped a little harder on the tipi floor to try to spook my new “friend”. The second time, my tapping was followed by silence. I sat anxiously for a few seconds before building up the courage to turn on my flashlight to check on the skunk. When I did, the skunk had disappeared! The skunk had not sprayed and the girls were fast asleep – a complete success!

Kara is standing in the back row on the right and is pictured with her MicMac cabin group. As a side note, our tipis have now been replaced by tree houses, so stories like this are thankfully a thing of the past.