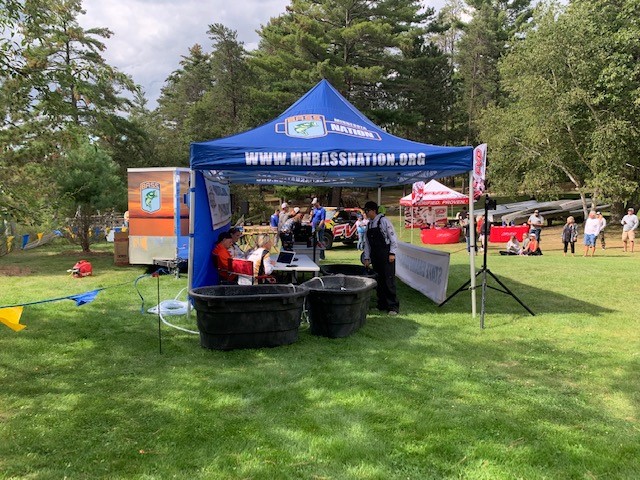 Time to catch some fish!

Fishing boats in line for a good spot!

This blog is from an article write up in the Northland Press, the local Crow Wing County Paper…

On September 10th and 11th, Camp Foley was host to over 90 school fishing teams from around the state of Minnesota. Highschoolers from all over flocked to the

camp grounds in hopes of getting the biggest catch. This tournament happens annually on a different lake chain, with this year being the Whitefish Chain. The anglers are in teams of two and are required to have an adult “boat captain” accompany them. Their goal was to catch large and small mouth bass, bringing the five largest fish back for weigh in at the end of each day of the two day tournament.

Boats started lining up at 5:45 am on September 10th, with many students eager to get a good spot in the line up of boats heading out. Boats could not officially head out until 7:30 am, and students had until 2:30 pm to come to the weigh station. The winners of the first day of the tournament would be the last ones in the line up the next day and the last to weigh in a second time. Ages of participants ranged from 14 to 16 years old.

Camp Foley’s location created a great launch and weigh in site for the tournament. The camp is located on the lower White Chain and near different channels that students could explore throughout their days of fishing. Foley has a spacious Marina dock that boats lined up with to have high school participants able to exit quickly to weigh in. The Tournament has penalties in place for inhumane treatment of the fish, and all students were expected to return the fish to Whitefish Lake in a designated area near Camp Foleys nearby shoreline property.

Congrats to the winners of the 2022 Highschool Bass Tournament, partners Wold and Neumann from Zimmerman Thunder Highschool, who together weighed in with over 33 pounds of fish over the two days of the competition and caught the biggest bass of the entire tournament, winning with a large mouth bass weighing 4.82 pounds.

When not hosting fishing tournaments, Camp Foley is a co-ed summer camp entering its 99th year of operation. They cater to campers from all over the United States and several countries. With its prime location on Whitefish Lake, the camp offers many different water recreation activities like water skiing and wake boarding, windsurfing, canoeing, sailing, and of course fishing. Along with water sports, they offer many traditional land activities for campers to enjoy.