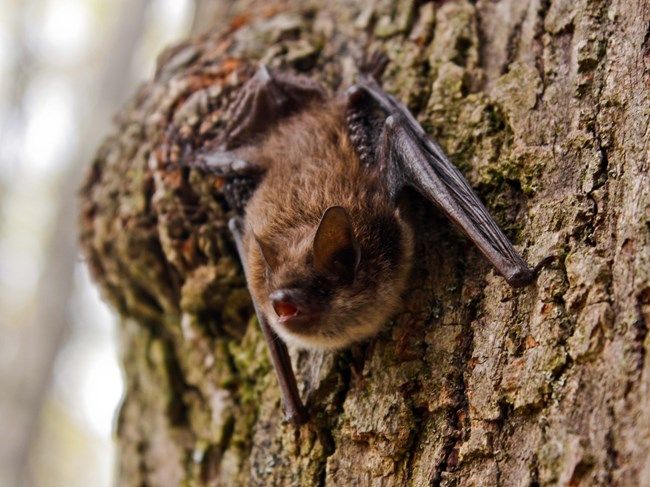 Have you ever taken a walk through Camp Foley and wondered what those little brown boxes were fixated onto some of the poles and trees? Well, friends, those are homes for some of our year-round campers….the bats!

Now, don’t get creeped out and scared like many people do when they hear the word “bat”. Bats, like snakes, are very misunderstood creatures and serve as a great resource in keeping our ecosystem at Foley healthy! Many people fear bats because of stories and movies about tropical bats that suck blood and swoop and bite humans, but I can assure you, they don’t live in Minnesota.

The bats living in Minnesota are very small, weighing in at about 1 ounce. The most common bat found is called Little Brown Myotis. Together with the Northern Myotis, they hibernate in caves and mines during the winter and then find caves, buildings, and hollow trees to roost in during the summer months. And, just like in movies, bats hang upside down! Bats are beneficial and gentle creatures, but have terrible eyesight! While many people claim to have been swooped at by a bat, they are more than likely in the way of a bat catching his dinner! Bats can occasionally look like erratic fliers, but that’s what it looks like when you chase insects through the air. Because the eyesight of a bat is so bad, they give off supersonic cries that bounce off objects in the path of the bat. Those echoes guide bats toward prey or away from obstacles. Another reason to appreciate the bats in Minnesota is their preferred insect to eat…the mosquito!

So the next time you are watching a cheesy horror flick and a scary-looking bat comes into the scene, remember, he isn’t trying to look scary, he is just trying to find his dinner with his eyes closed!