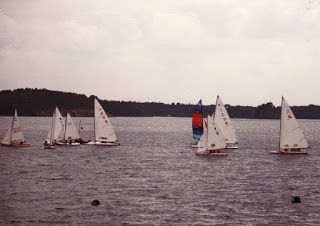 Below are some interesting things I found out about camp in 1983 after reading some old newsletters.

A Sail Racing Clinic was held in the summer of 1983. There was a prerequisite in that campers must have received their Mate to attend. For six days, sailors would sail all afternoon in a concentrated program. Racing and theory were taught.

Sounds similar to the current Sail Racing class, without the prerequisite. The “Activity Plus” option we’re having this summer seems to lend itself to this idea of getting campers out on the water for longer periods of time! Check out our most recent newsletter for more details, or continue to check the blog to find out more about Activity Plus.

The all-camp special day that took place once per session was called “Ancient Greek Days” in 1983. Events planned were: chariot races, pentathlon, Greek dancing, a tribute to Zeus and other gods and goddesses, and Greek food (pig roast). Campers were told to bring an old sheet to make a toga.

This sounds a lot like the banquets we have at camp now. I’m sure it was very similar, it just wasn’t called “Final Banquet.” We had an actual Ancient Greece Final Banquet in 2001, were any of you there? I know I was! What are your thoughts on this “Ancient Greek Days” theme? Something we should do again? TOGA TOGA TOGA!
As of March 1983, the second session had more campers registered from St. Louis, MO than any other city. Des Moines, IA was in second and Minneapolis, MN & Suburbs was in third!

Where are our second session St. Louis campers? Why do you think so many St. Louis kids LOVE Foley and the second session? I bet everyone was calling it “Soda” that session and not “Pop”!

Were you at camp in the 80s? Were you at Ancient Greek Days and have a photo to share? We’d love to see it! Tell us your CF memories for TBT!