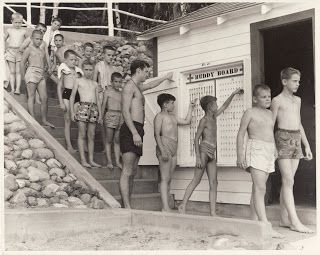 What’s the one activity that absolutely everybody does at Camp Foley at one time or another? Swimming! With 4,000 acres of fresh, clear water right outside our cabin doors, it isn’t surprising how often campers are down at the waterfront. One of the first things campers do when they arrive at Foley is to take their swim test. And for those of you that continue with swimming past that first day at Foley, we thought we’d look into the history of swimming in general and some of its histories at camp.

The earliest records of swimming showed up in Stone Age paintings from about 7,000 years ago! But swimming, as we know it today, started right here in the United States in the early 1800s, and breaststroke was the first stroke used in competition. How about this for a fun fact: Many Americans often used swimming competitions to settle differences (such as property rights) in the frontier. Swimming was a part of the first modern Olympic Games in Athens in 1896, and from the likes of recent phenoms Michael Phelps and Ryan Lochte, the sport of

swimming has continued to grow in popularity. The IOC (International Olympic Committee) recognizes four strokes – backstroke, breaststroke, butterfly, and freestyle – and 32 individual swimming events. Swimming has more officials than most sports (which may be a surprise to some). The officials include a referee, a starter, a clerk, of course, timekeepers, inspectors of turns, judges of strokes, and finish judges! Can you believe it takes all of those people to keep track of some swimmers going down and back in a pool?

Not so surprisingly, not all competitive swimming takes place in a pool. There is also open water swimming that takes place usually in a lake or sometimes ocean. The 2008 Olympic Games in Beijing was the first time an open water event was added to the Summer Olympics; however, in the first four Olympics (1896-1906), all swimming events were held in open water. Some other interesting Olympic Swimming dates include 1912, when electronic timing was introduced; 1936, when swimmers first dove into the pool from diving blocks rather than the edge of the pool; and 1976 when swimmers first used goggles!

Below are some interesting Camp Foley Swimdock Facts:

1950s – First mention of the “checkboard” and buddy system

A lot of campers enjoy the water through activities such as diving, sailing, snorkeling, or waterskiing, but think of all the times you’ve enjoyed just a nice free swim playing at the waterfront or enjoy a cool-off swim. Maybe next summer you’ll take advantage of a swimming class to learn some new strokes or to improve your technique? Or maybe you’ll just head down to the waterfront a few more times to enjoy a swim in Whitefish Lake and cool off after a warm Minnesota summer day. In whatever you choose, think of how many Foley campers before you have done the same!