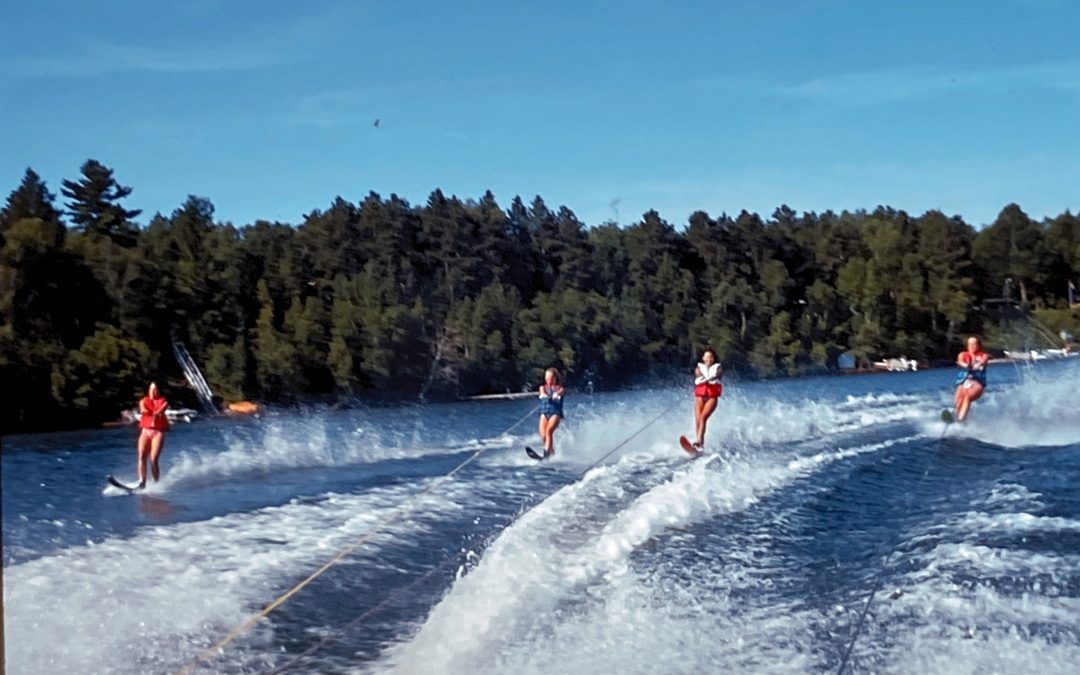 Did you know that the most popular water sport at Camp Foley was invented by two teenagers from Minnesota?  That’s right!  In 1922, 18-year old Ralph Samuelson theorized that if it was possible to ski on snow, it should be possible to ski on water too.

Ralph convinced his brother Ben to pull him across Lake Pepin, Minnesota in a powerboat with a clothesline.  Ralph started out by trying downhill snow skis, cross-country snow skis, and even wooden planks which he strapped to his ankles with a window sash.  Eventually, Ralph learned that by leaning backward to keep the front tips of the skies above the water, and by making sure Ben kept the boat running fast enough, he could ski across the lake.

Ralph and Ben began custom building skis specifically for the water from wood planks.  They learned that wider skis worked best, and before long they were holding public exhibitions in the summer on Lake Pepin to show off their new skills.  People began coming from to the lake from nearby communities to watch Ralph, who soon learned he could slalom around buoys on water skis too.
By the time Ralph added the first ski jump over a floating ramp to his exhibition, people were traveling to Lake Pepin each summer from miles around to see this fascinating new sport.
By 1937, Ralph was performing water ski exhibitions in Minnesota, Michigan, and Florida.  One of his most famous variations was to have himself pulled with a long rope by an airborne WW1 seaplane at 80mph.  Audiences loved it.  And by doing so Ralph became the world’s first speed skier.
This wild, new Minnesota activity caught on with vacation resorts across the country in the 1950s, and soon Hollywood was including elaborate water ski “stunts” into their big budget, widescreen, color musicals into their teen beach/surf romantic comedies.

Camp Foley began teaching water skiing in 1956 and joined the National Waterski Association in 1958.  The activity quickly became a camper-favorite, and we continue to expand and improve our classes, programs, and equipment – adding knee-boarding, barefoot skiing, and in 2004 wakeboarding too.  This year we made another impressive addition to the program with the purchase of a powerful 343-horse power Centurion ski boat.

Here at Foley, waterskiing instruction is open to boys and girls of all ages that have passed their swim test.  Our certified lifeguard waterskiing instructors teach campers all they need to know to learn the basic and expert tips to improve their skills. Campers can earn their Beginning, Intermediate, Advanced, and Expert Camp Foley Ski Awards.

If you haven’t tried waterskiing at Foley yet, you should!  With a little help, you could be out there speeding across Whitefish Lake having fun in the sun.
For more info about waterskiing, check out the USA Water Ski Association, this cool History of Water Skiing link, or our Water Skiing at Camp Foley video.