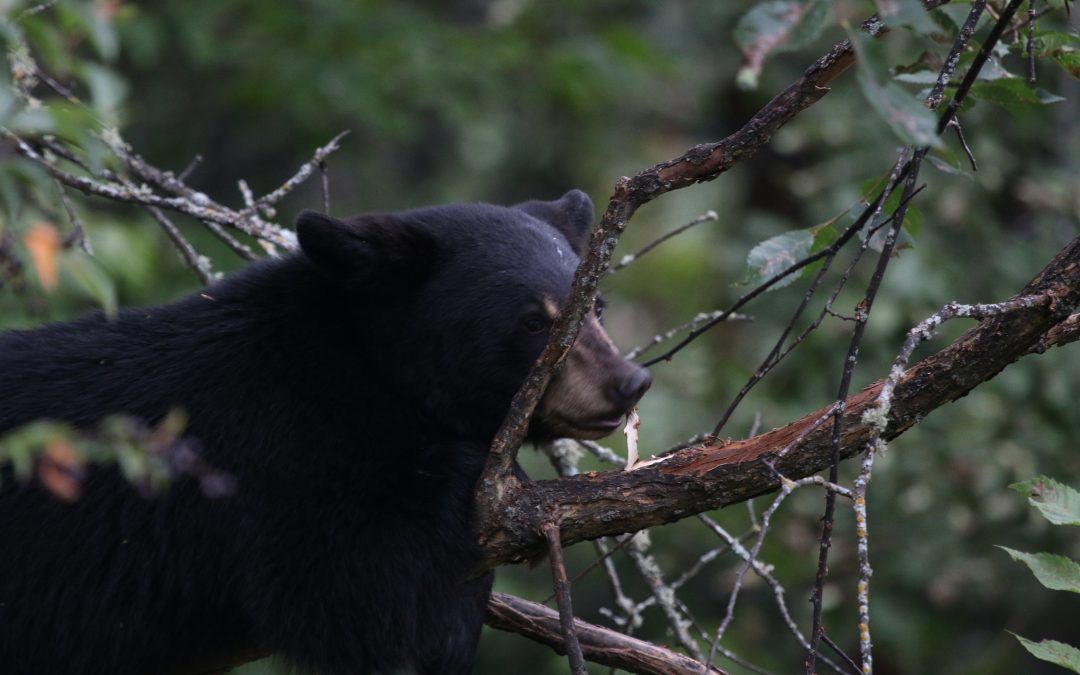 Are there bears at Camp Foley?  Possibly…  While we certainly don’t see them wandering through camp every day, one species of North American bears is indigenous to the North woods. It’s the Minnesota Black Bear, otherwise known as the North American Black Bear.

Black Bears are closely related to Brown and Polar Bears.  They can grow to weigh 150-600 lbs., and stand 5-7 ft. tall when up on their hind legs.  While most Black Bears have a rich, black coat; about 6% actually have brown coats.

Unlike Grizzly Bears, Black Bears are rarely aggressive towards humans.  In most cases, Black Bears will run or retreat from humans unless they feel they are being threatened, a human is trying to harm their cubs, or their escape path has been cut off.  The most common reason humans are attacked by Black Bears is that they make the mistake of trying to feed them.

In spite of the fact that Black Bears have been over-hunted in previous decades, the Minnesota DNR estimates that there are now about 27,000 in Minnesota, and they have been removed from the endangered species list.  Hunters still need a special permit to hunt them, but a small number are taken each year with bows and arrows, muzzleloaders, and modern rifles.

One of the reasons Black Bears were able to repopulate so quickly is because they are versatile omnivores.  Black Bears eat plants, insects, and animals they find on land, in the water, and in the trees.  As an arboreal bear, they continue to have the ability to climb trees even as adults.  Up to 85% of the Black Bears’ diet is plant life.  Especially in early spring when they are thin and weak from long periods of inactivity, Black Bears will often feed on roots, plants, and young shoots from emerging trees.  While they don’t technically “hibernate,” they do enter into a similar long-term sedative state during winter months where they can lose up to 40% of their body weight.

As Black Bears regain their strength and muscle, they’ll begin adding fish from local lakes and streams; and other forms of meat to their diet.  Although Black Bears can run up to 35 mph for short distances, they can’t keep up that pace long enough to be effective predators of small game.  Occasionally they will catch and eat moose, beaver, and other animals, but they are much more likely to feed on carrion they locate with their powerful sense of smell or scare away smaller predators that have recently made a kill, and steal their prey.

Black Bears love honey and have been known to tear deep into trees to get to nests of bees.  They will often eat the entire hive’s supply of honey even while being repeatedly stung, and in fact, often eat honeybees and other hives of insects.  Perhaps this trait is what inspired novelist A.A. Milne to name his character Winnie the Pooh after a famous Black Bear named Winnipeg, who lived at the London Zoo.

Black Bears have had quite an impact on American history:  Morris Michtom, the creator of the teddy bear, got the idea to create this children’s stuffed animal when he saw a political cartoon (based on a true event) of President Theodore “Teddy” Roosevelt refusing to shoot a black bear that his hunting guide had tied to a tree.  And in 1950, a Black Bear cub that was rescued from the Capitan Gap fire in a National Forest became the first mascot of the United States Forest Service. They named him “Smokey the Bear.”

Have you ever seen a bear while out hiking or camping?  If so, how did you react?

You can learn more about the Black Bear from the Minnesota DNR‘s website, or The American Bear Association, which is also located in Minnesota.